Share All sharing options for: Anderson injured, but Senators prevail in shootout.

Remember when the Ottawa Senators decided to capitalize on the excitement of 2012-13 and adopted the slogan "ready for more?" I am now pleading for them to change it to "please, no more."

Let's get the big story out of the way. Early in the third period, New York's Chris Kreider got caught up in Marc Methot's stick, fell, and slid into the net, pinning and twisting Craig Anderson's leg into the post. Anderson took several minutes to get up, fell back down, and had to be helped off the ice. Official prognosis is sprained right ankle, day-to-day. In my humble opinion, it looked worse than that.

Tonight's lineup featured nine players who have spent time this season in the American Hockey League. With Anderson out, Robin Lehner will likely come up and make it an even ten. The Ottawa Senators will be 50% a minor league team.

And so I officially dub them the Binghamton Senators (featuring Daniel Alfredsson).

Binghamton got out to an early lead on a shorthanded rush when Daniel Alfredsson set up Jakob Silfverberg, who scored one of the prettiest top shelf backhanders you will ever see. Afterwards it was a fairly equal contest between two teams with excellent goaltending and very solid defence for almost two periods.

Then the roof caved in. Kreider fell, Anderson fell, and suddenly Binghamton was faced with a cold Ben Bishop coming into the net. Bishop stood tall for eight minutes before surrendering two goals in under a minute. Fortunately for Binghamton, Mika Zibanejad saved the day a mere two minutes later with a very rare power play goal.

Actually, a heck of a shootout. Seven rounds, another Silfverberg shootout goal, and a surprise winner by Kaspars Daugavins. An excellent shootout performance yet again by Ben Bishop. It's incredible what this team is managing to do in the face of all the injuries, and they (along with head coach Paul MacLean) deserve all the credit they can get.

B-Sens Hero: Daniel Alfredsson
What can you say about the captain at this point? For over 15 years he's carried this team on his back, leading by example, and giving everything he has. Tonight he continued being Daniel Alfredsson by setting up Silfverberg's shorthanded goal, blocking two shots, and even throwing in a takeaway. It doesn't matter when or where you throw Alfredsson out onto the ice, he always gives you his all.

B-Sens Hero: Jakob Silfverberg
Ooh Ah seems to have found his game this week and has been arguably Binghamton's best player. Eight shots and an incredible goal, his third of the season, make Silfverberg a hero. Oh, and yet another shootout goal.

B-Sens Hero: Mika Zibanejad
It might seem a cliché to make the two goal scorers heroes, but Zibanejad earned it with his goal. After weeks of firing shots from as far out as he could, Zibanejad was part of a ridiculous power play cycle before hammering a rebound in from close range. He has a heck of a slapshot, and it was great to see him use it and score. Hopefully this increases his confidence and he continues to get better.

B-Sens Honourable Mention: Ben Bishop
Okay, so two goals in a minute isn't exactly hero-worthy, but Bishop came in ice cold after an injury to the best player left on the team. He stopped six of seven in the shootout and delivered a great celebration to the crowd.

B-Sens Killer: Chris Kreider
Took out Anderson. Dead to me. 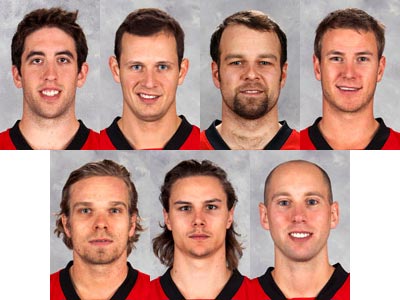