Get to Know Your Goal Horn Operator: Nightbreak Q&A

Today we get to know Silver Seven member and Ottawa Senators goal horn operator Nightbreak with a topical Q&A.

Share All sharing options for: Get to Know Your Goal Horn Operator: Nightbreak Q&A

Amelia L: How did you get your start as Ottawa's goal horn operator? How long have you worked for the team?

Nightbreak: This might take a minute. It's a bit of a convoluted story. I started in the fall of 2000 when the phone call came out of the blue. I had worked for an A/V company in town and the person in charge of us all had helped build the Corel Centre's system. Apparently my name got passed along as someone who would be useful.

So I started out at this junky PC and my job was to click the ads that ran behind the player benches, halls, and the zamboni entrance. The ads were on a roll and would slide up and down (and occasionally right off the roll.) I also was learning the Matrix, which was a Unix database that ran dot-matrix boards throughout the arena. (This was the year we got the first Power Ring, replacing those boards, so they were repurposed in pieces to the 300 & 400 levels). I shared this job with another guy, so only got a few games here & there.

A couple years later, the person doing the other half of the Matrix & goal horn moved onto other things, and my partner and I inherited the Matrix fully (the rotating board signs having been replaced, upgraded, and reassigned). He got the horn.

And then one of the computers running the database died and there wasn't enough work for two people. So he got promoted to the video room and I got asked if I could run the whole system by myself. I thought I could. So I got the horn, the Matrix, and the arena lights. Then the Matrix broke completely, leaving me with the horn and the arena lights.

Amelia L: What do your duties entail? What does your work space look like?

Nightbreak: The work space has undergone a lot of changes. There used to be large PC monitors. Then they all went away when the computers broke. So I had some free space for a bit. Now there are scoreboard monitors there.

Here's a picture of what it used to look like. 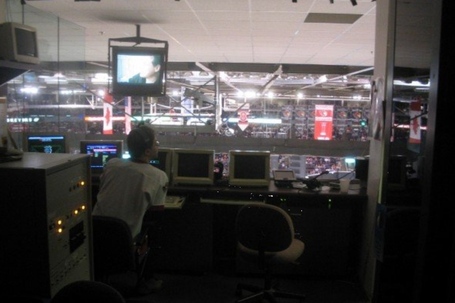 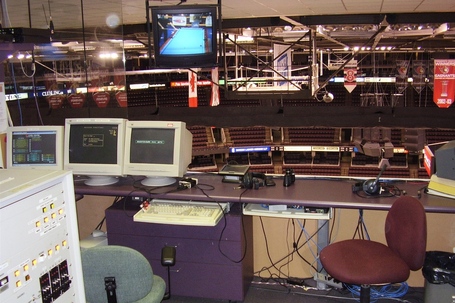 And here is what it is now: 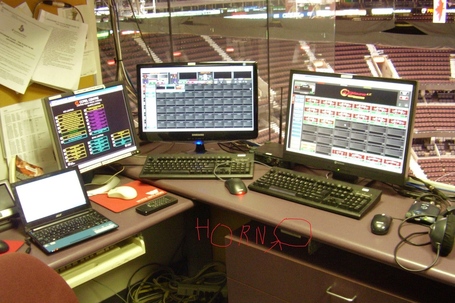 Amelia L: Have you ever pressed the goal horn at the wrong time?

Nightbreak: It's possible I might have, but it's ingrained in me to NOT DO THAT. When I first started working, I was told that a horn without a goal was grounds for a $10,000 fine to the team, plus you got fired. I don't believe that that's the case, unless it's a malicious use of the horn, but it's certainly made me err on the side of caution for many years.

I remember one case against the Leafs where we had just scored to pull within one goal and Fisher then sent a shot right under the crossbar that appeared to be a goal. The goal judge light went on and I hit the horn, but the goal was waved off pretty much right away.

If the light's on, it's generally excused. But you have to look for the light, the ref, and the puck. Mostly I double-check the referee to make sure, like with Turris' second goal against Florida during the home-opener. The puck had disappeared under the white padding, so I had to look to the ref for confirmation before triggering.

You saw what happened in Carolina when Skinner hit the post. If the horn goes when there is no goal, the play is halted and a faceoff is taken. In some cases, it could even be a delay of game if it's blatant. 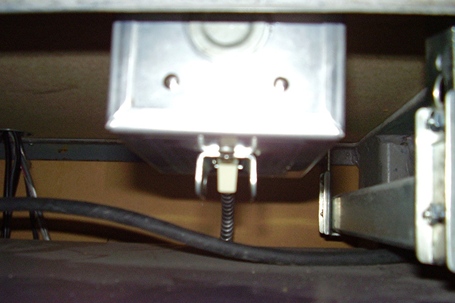 Amelia L: Have you ever experimented with different goal horns? If you could change the goal horn to any sound, what would you change it to and why?

Nightbreak: According to Bruce Firestone, that's the original VIA Rail horn. It hasn't changed. And I wouldn't change it one bit, although I had an appreciation for Atlanta's truck horn a few years back.

See below for my style remarks.

Amelia L: How did you feel about your inclusion in a Down Goes Brown post about Ottawa traditions a few years ago? Has it influenced your style at all?

Nightbreak: It was the 2008 post on how Ottawa steals traditions from every other team in the league. That particular article was more of an eye-roller for me. I enjoy the more recent cracks at my expense. And it hasn't influenced my style at all, because my style is the same as the two people before me. Now I just give it a little more oomph during Leaf games, just to irritate them.

Our pattern is two longs, two shorts, and a long. Occasionally I'll do three or four shorts depending on events (like Alfie's 400th) but that's the standard that I was taught. It's more difficult than it sounds because attempting to meld the long & short so they're continuous, but distinct is difficult. My first horn ever was AWFUL. So much that my partner's phone rang and it was a friend of his wanting to know what had gone wrong.

Amelia L: You've worked some international games as well. What are the differences between Senators games and Team Canada's? What about the 67's? Do you work those?

Nightbreak: I don't do 67s games. I made the decision immediately because the 67s have their own people and we shouldn't get in their way.

I did parts of the 2004 World Cup and all of the 2009 World Juniors. The Juniors was a long two weeks and we had decided that the standard was just three blasts, straight, given Canada would be wreaking havoc in their pool. Of course, I leaned on it a little bit when Eberle scored against Russia.

The difference is mainly in the game-day aspect. Horn's the same, regardless. But the day is much longer and the schedule has different sponsors. It's different, in terms of events and direction from our game-day director. Often we have other people with us, like third-party directors or laser/lighting systems and things can get a bit crowded.

Amelia L: What is your favourite aspect of a Sens game?

It's hard to say. There used to be a moment a couple of years ago where I would kill all the arena signage at a specific music cue, just before Stuntman Stu would welcome everyone to the game. If I hit it just right, it was magical. Of course, every year is different in terms of promotions (Be Red, Rev Up The Red, etc.) so that can change.

These days, given all that we've gone through, I think I enjoy hanging out with the Silver Seven crew while the game is on more than anything else. I tried going to a bar to watch the playoffs last year, but after the first period, I couldn't take it without you guys and came home to hop online instead. Don't know what that says about me.

Amelia L: You have a couple well-known hobbies: haiku master and military medal collector/donor. What is your favourite medal? Can you tell us what drew you to these hobbies?

Nightbreak: The haiku thing really doesn't exist, I'm sorry to say. It's just the signature. True haiku takes a much better understanding of Japanese history, language, and the concept of 'on'. (what we translate as 'syllables' but means much more in Japanese). If I was that talented, then I could quit all my jobs and go make money as a poet.

As for the medals I've worked with, it started a few years back when I learned that none of the regimental or other Forces museums have Acquisition budgets, but rely solely on donations. The Canadian War Museum itself has the National Collection Fund, but all that also comes from donations, rather than from the federal government.

I sort of straddle a line between the collectors and the museums. Occasionally they get along, sometimes they don't. I see that there's a need for both to work together if we're to preserve a lot of the history that can be melted down at any moment for its silver content.

My favorite medal is a bit of an old one: The Colonial Auxiliary Forces Officer's Decoration. It was awarded for 20 years commissioned service as an officer in the Colonial Forces (naturally), which included Canada, from 1899 - 1930. It comes in the cypher of three different monarchs: Victoria, Edward VII, and George V. Edward VII's is gorgeous on its own and I have yet to retrieve one of those to a Canadian, but there's not very many of them to start with. Only around 200, compared to 850 Victorias and 1600 George V's.

Amelia L: What are your favourite Senators home goals?

Nightbreak: Fisher's double-overtime goal against the Leafs in game 6, 2004.

I don't think it was one of mine, though. Far too understated at the end there :P

Chara's shot that hit three posts before it dropped over the line.

That whole night against Atlanta in 2003 when the Sens didn't get paid. I don't think I've ever seen a more pissed-off Marian Hossa just scoring four goals at random [Editor's Note: This section was removed at the request of the interviewee.]

And Vermette's behind the back, between the legs goal against Tampa. ... Which I see he also did against Calgary in 2011 when he was a Blue Jacket.

Nightbreak: It's a unique job, even though it's not the only part of the job. I work for a good organization, as far as I know (I don't interact with many of the other parts of the whole, other than the audio crew, Power Ring, Stuntman Stu, and occasionally the video team. We're all part of the same 'game day staff' and rely on each other).

I really do enjoy hanging out on Silver Seven here with so many smart people, too. My appreciation and love for hockey has only grown the more time I've spent with all of you.

Oh, bonus track for everyone:

This was a 2006 scoreboard video. I snagged it back then from our production team and set it up on a private YT channel, just for all of you. Noted for cheese and hilarity. Also, that is not a real goal horn button and Lyndon has no relation to my gig. :P