Let's start this out by being getting straight to the point: Robin Lehner is the best goaltending prospect the Ottawa Senators have ever had.

Lehner was drafted 46th-overall in the 2009 draft). Remember the Antoine Vermette for Pascal Leclaire trade? Ottawa got a second-round pick along with Leclaire. That pick turned out to be, you guessed it, Robin Lehner. Not a bad trade in retrospect.

Robin Lehner is the direct descendent of Michael Lehner, a goaltending coach primarily in the Frölunda system of the Swedish Elite League. Michael Lehner is best known as the goalie coach credited with making Henrik Lundqvist the goalie he is today. He also had some unusual techniques in developing his son into a prodigy.

The younger Lehner's greatest professional achievement to date came in his rookie AHL season of 2010-11. Lehner came in expected to run away with the starting job in Binghamton, but quickly lost it to veteran Barry Brust. But after Brust carried the team to the playoffs, Lehner ended up stealing the show, going 14-4 while leading Binghamton to their first Calder Cup championship. Lehner was awarded the Jack Butterfield Trophy as playoff MVP.

Despite coming off his worst professional season in 2011-12, expectations were still very high for Lehner. Fortunately for the Senators - both Binghamton and Ottawa - he has rebounded and is in the midst of putting up his best professional season ever. He's been all-world. How good has Robin Lehner been?

This graph is interactive. Click it. You know you want to. 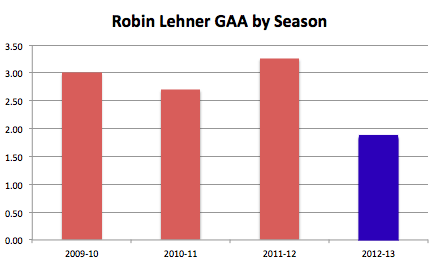 Lehner's regular season goals-against average has always been ordinary at best. His one playoff season he put up a brilliant 2.10 GAA, far better than his regular season best 2.70. This season? 1.87. Good for a 3rd-place tie in the AHL with former teammate Barry Brust. 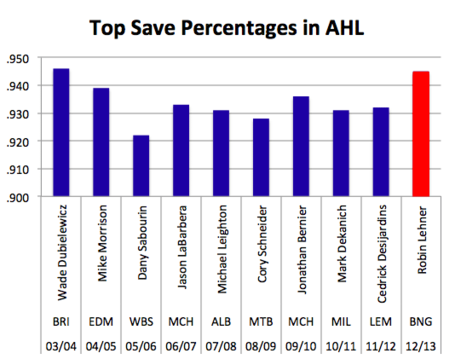 Now, save percentage is where Lehner has really shined. Binghamton's 2012-13 defence is... not very good. At all. Especially not since Ottawa pilfered their best blueliners. Lehner averages 34.3 shots per 60 minutes and yet he has a sterling .945 save percentage, top of the league. How ridiculous is .945? If it holds up, it will be the best save percentage in the AHL in nine years.

And Wade Dubielewicz's AHL record save percentage is a mere .001 better than Lehner's current number.

His incredible statistics aside, Robin Lehner has been receiving a great deal of praise from the Senators and media for his increased maturity this season. He's been credited with taking his role in the organization more seriously and coming prepared to excel. And he hasn't just excelled. He's dominated. Lehner has been unquestionably Binghamton's most valuable player (and capable backup enforcer), and they wouldn't be tied for third in the AHL without him.

This is what makes Lehner so exciting. He has the ability to win games by himself and lead a team to a championship, an unprecedented trait in a Senators goalie. Goaltending woes have been a problem for the Senators since their inception. Yet suddenly, they are faced with the problem of having at least two elite goalies in the system. Craig Anderson has been excellent on the big club, but you get the impression he's just holding the job until Lehner is overripe in a season or two.

Robin Lehner is the future. That the Senators have been biding their time with him and being patient with his development is proof positive. He's a blue chip prospect, and they don't want to ruin him. They don't want Lehner to just be a good goaltender, or even a great one. They want him to be a franchise goaltender.

And he very well could be.

(Also, if we didn't say such great things about Lehner, we're pretty sure he'd shank us. Safety first.)