If you had told me 10 games ago that the Panthers might paw their way back into the playoff hunt, I probably would have called you crazy. I might still call you crazy, because they're still very much a long shot. But they've also been on a bit of a tear recently with a 7-3-0 record, and had the potential to pass Ottawa last night if both games had gone the other way. But is this a flash in the pan, or are they actually playing well at this point? Let's get to the graphs. 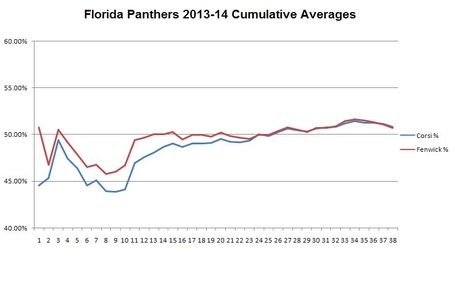 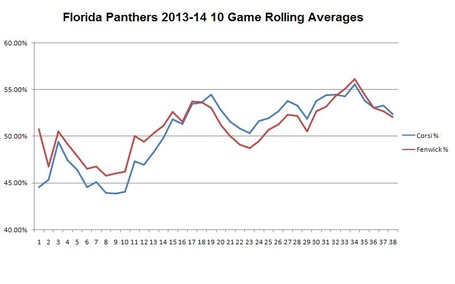 Well, that was definitely a league basement start for sure. But since game 11, it's been somewhat stable at near the middle of the pack numbers. There has been some up and down in the 10 game averages, but it's still generally upward. 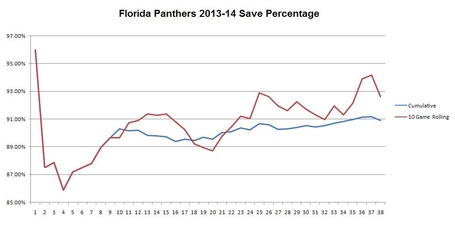 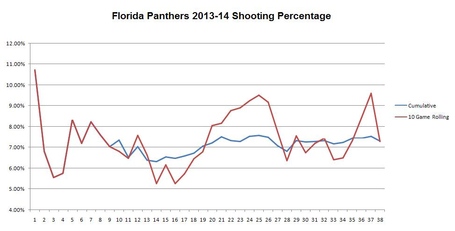 With the save percentage and shooting percentage, we kind of see the opposite of what we saw with Toronto to start the season - when the goaltending was okay, the shooting percentages were struggling. When the shooting percentages were doing okay, the goaltending was struggling. Neither was doing well enough to cover for the shortfall in the other, but both had stretches of being unsustainably low. The Cumulative averages are still a little on the low side of where they need to be for Florida to really get back into the mix, especially the save percentage, but the shorter term 10 game averages have shown some promise.

Florida's level of play has definitely recovered from their early season woes, and may have reached a level higher than the low expectations most had for them before the season started. But that early season performance put them in a deep, deep hole in the standings and it remains to be seen if their recent performance can pull them out of it. But hey, it's the Eastern conference, so it just might - might - be enough.