Or at least the canary for wider acceptance of advanced statistics.

I think we all know what kind of picture is about to be painted here. Early in the season, the Maple Leafs were called out as "the canary in the advanced-stats mine shaft". Horrible possession numbers last season, but ended their playoff drought anyways. Of course, for them to be the canary, they had to continue to have horrible possession numbers this season. I think we all know how that's gone, but here are the graphs anyways: 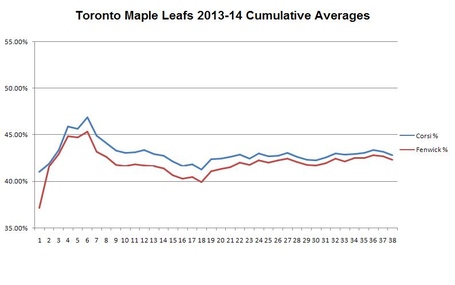 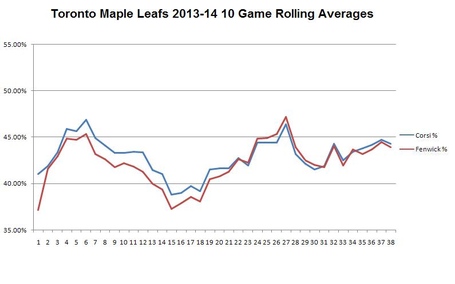 Their averages never top 50%. Their season cumulative average has so far peaked at just over 45% for Fenwick and 46% for Corsi, after game 6. They currently sit in last place in the league for 5 on 5 possession metrics. I think we've firmly established that they are the canary.

So how is that canary doing? When that Grantland article was written the Leafs had won 3 out of their first 4 games, somewhat ironically losing the only game of the 4 they had positive possession in (53% Corsi, 50% Fenwick). They went on to win their next 3 games as well, also with terrible possession statistics. It was starting to look like maybe that pet store employee was right all along. Well, as long as small sample size didn't rear its ugly head... 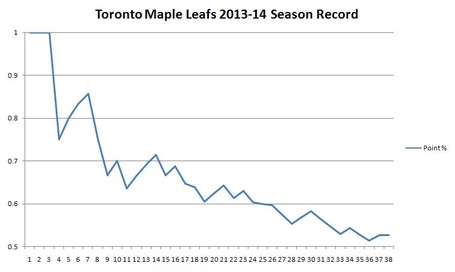 Well, hello there small sample size. Since that very strong opening, Toronto has set a steady trend downwards from spectacular, to solid, to bubble, to "well, it's the Eastern conference so it might be enough". They're on pace for an 86 point season at their current average, which could still fall more.

So if the Leafs possession statistics are that bad, how have they held on even this well? For one, their goaltending was pretty spectacular for a solid stretch, but it has been coming down lately. 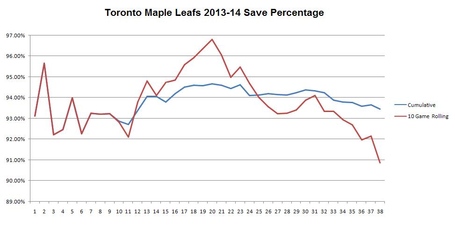 The cumulative 5 on 5 SV% is still very high, but has come back down into the realm of numbers that could at least possibly be maintained (even if it isn't likely) and is 4th in the league. Their rolling average has fallen harder though, with a number that would rank 4th last if it were their full season average. 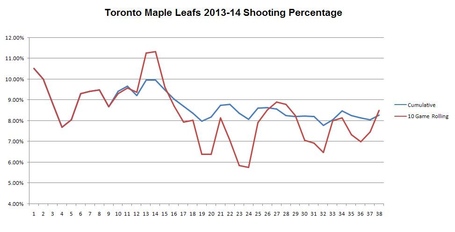 Another part of it is their shooting percentage, which hit some pretty big highs before the goaltending spiked up, and then had it's inevitable drop-off covered by that very same spike in goaltending. It has somewhat stabilized in the high but not absurd range.

It looks like the Leafs have been going for bonus points in trying to disprove possession stats as well - they've won only one game where they had positive fenwick, and one game with positive corsi. Strangely, not the same game. They've also had 2 games where they won with a positive shot differential at 5 on 5, but still somehow had very bad fenwick and corsi numbers.

So there we have it. The advanced statistics say the Leafs should be in the basement and they aren't. But they are tumbling and are holding on to a playoff position only on the strength of early season shooting and goaltending streaks, so the canary isn't safe just yet.