Silver Nuggets: Detroit Red Wings, Up or Down?

Detroit has been up AND down so far this season, will they just pick one already?

Share All sharing options for: Silver Nuggets: Detroit Red Wings, Up or Down?

I'll be honest here, I'm not quite sure what to make of Detroit at this point in the season. Generally picked to be 2nd or 3rd in the division, they're currently sitting in the 1st wild card position 4 points back of Tampa. And on average, they haven't looked too far off of those predictions. On average.

The thing about just looking at an average is that it can conceal wild variations. The Red Wings have been streaky this season, only twice have they had a win that wasn't at least back to back, and same for losses (including OT/SO). And they've only had one set of back to back wins and back to back losses, with 11 of their 15 wins coming in 3 clusters, and 17 of their 21 losses. 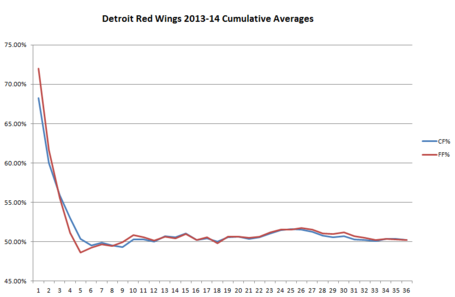 The possession stats start out well, but that tends to happen when you open against Buffalo. Then a steep decline down in to sustainable territory... then below 50 before coming back up a bit and seeming to stabilize at a modest positive until mid November. Then up, and up, pushing in to top 10 territory... Then December hits and it's falling, falling...

It's basically been a rollercoaster. It shows up a lot more in the rolling 10 game average: 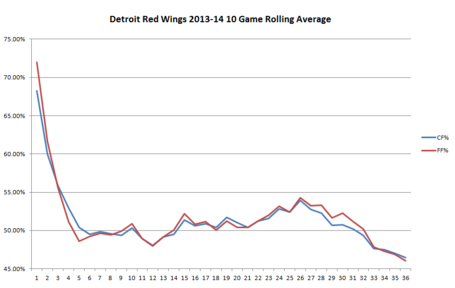 So up and down, up and down. It's been dropping pretty heavily recently, but it's hardly the steady decline we saw with Montreal. The recent run is definitely a concern, but it also almost perfectly lines up with the absence of Henrik Zetterberg, with a healthy overlap with the absence of Pavel Datsyuk. It's hard to put such a steep decline in recent games at the feet of just one or two injuries, though. 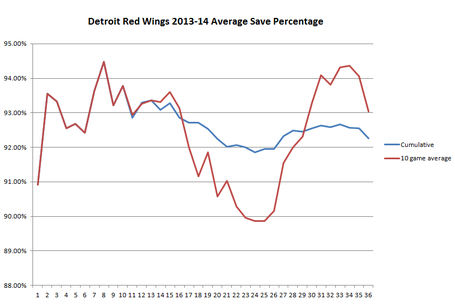 So will the real Detroit Red Wings please stand up? They play like a team that could exceed the generally good expectations for stretches, and like a team that could drastically fall short of them for other stretches. For the moment, it just happens to be averaging out to not far off of where they were predicted to be. That also happens to be in the way of the Senators so let's hope the downs outweigh the ups over the rest of the season.