Silver Nuggets: Are the Tampa Bay Lightning a Sleeping Dragon?

Share All sharing options for: Silver Nuggets: Are the Tampa Bay Lightning a Sleeping Dragon?

Yesterday we looked at the Montreal Canadiens, and if their position in the standings was stable or transient. Today we move down a position in the division to the Tampa Bay Lightning.

Tampa had a decent start to the season. They came out of October in a 4 way tie for 2nd in the Flortheast before going on a 4 game tear to start November to pass Toronto for first in the East. They were far exceeding preseason expectations that placed them as a team struggling to make the bubble.

Then... disaster. Steven Stamkos goes into the goal post and breaks his leg. Their superstar, the piece their team is currently built around, out long term! Oh woe is them, expect them to sink in the standings. 'Tis a lost season! A narrative Senators fans are somewhat familiar with.

Sure, they're not leading the Eastern Conference anymore, so they've definitely declined a bit. But as of today they still have a firm grip on the 3rd spot in the division, and are hot on the heels of the second place Habs. Part of the reason for that is their possession game (the vertical line is the Stamkos injury). 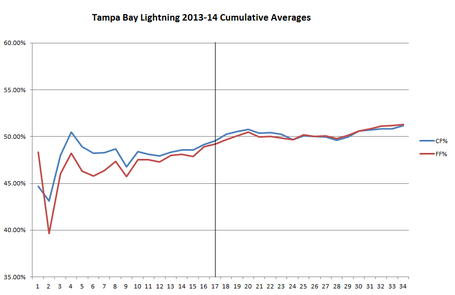 So, once the early season fluctuations levelled out, it's been in an almost steady growth without even a blip after the Stamkos injury. It seemed to stabilize right around 50% for a bit, but they've seen strong growth over the past 6 games. It really shows up in the rolling 10 game averages. 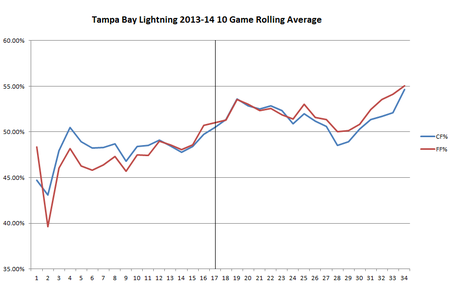 Part of their success, like the Habs, lies in goaltending. Ben Bishop is posting career numbers, and is 4th in the league for save percentage. And like the Habs, this brings up the same concerns of sustainability. It's not outside of the realm of possibility, but it's not something that can be relied on either. 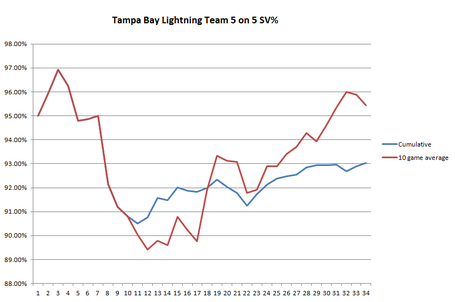 The 10 game rolling average is very high right now, and certainly can't be sustained at that level. But the overall average has mostly been increasing, with the one big dip after the first 10 games coinciding with their western road trip to Phoenix and California. And if that goaltending does decline back to more average levels, their skaters might just keep up the momentum.

And the seemingly fast track recovery that Stamkos has going on won't hurt their chances either, another narrative Sens fans are familiar with.

They're a team where the individual parts are all having their ups and downs, but so far when one part has a down, there's a decent chance another part has been able to cover for it. We saw that first hand when the Sens outskated them in Tampa, but Martin St. Louis put on a clinic in how to be a game changer.