Silver Nuggets: Are the Montreal Canadiens a Paper Tiger?

Could the Senators actually catch the Habs before the season is out?

Share All sharing options for: Silver Nuggets: Are the Montreal Canadiens a Paper Tiger?

Paper tiger is a literal English translation of the Chinese phrase zhǐlǎohǔ, meaning something that seems as threatening as a tiger, but does not withstand challenge. - Wikipedia

Mostly predicted to be a bubble team competing for a wild card position going in to the season, the Canadiens have so far exceeded the expectations of those outside their fanbase by competing with the Bruins for the top spot in the Flortheast for most of the season.

But how stable is that success?

Last year Montreal succeeded in large part thanks to their solid possession game. Their #fancystats were quite good - they had better possession stats than their opposition in 30 of 48 games, significantly so in 21 of those, and were only significantly out possessed in 9 (several of which could be put down as due to score effect).

This year, it started out looking almost as good. At the 10 game mark their average Fenwick % and Corsi % were only lagging slightly. But what's this? 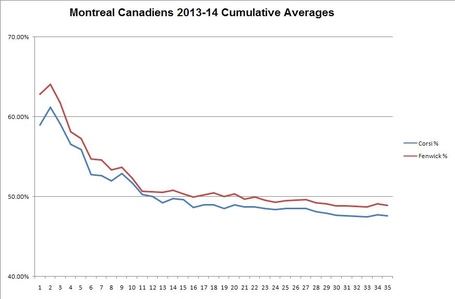 Oh... That's, uh, not so pretty. It's like they dropped off a cliff or something. Just how bad is it? Well, if we look at the 10 game rolling averages, we can get an idea. Right there, as soon as the 10 game average doesn't include the entire season (I've conveniently added a line at game 11) it drops below 50%. In fact, you can go up as high as a rolling 30 game average before their numbers as of today find positive territory.

But they've so far been holding on somehow, and that somehow is goaltending. They've received a 93.5% 5 on 5 save percentage from Carey Price and Peter Budaj so far this season. It's high, it's tough to sustain, but it's not impossible...

Well then. Not quite as ugly as the possession charts, the overall save percentage average has been in almost steady decline starting with game 14, and is now at it's lowest point since game 3. The rolling 10 game is uglier, and is currently well below the league average.

Basically, their skaters have been underperforming and their goaltenders have been posting career highs to bail them out. But Budaj peaked in his second game and has been in steady decline since then, and Price is posting numbers far above his career average or career best. For some perspective, the only goaltenders that have posted a SV% similar to what Price is posting right now over a full season with a similar percentage of games played are Tim Thomas in 2008-09 and 2010-11, Domink Hasek in 1997-98 and 1998-99 and Marty Turco in 2002-03.

So which gives more in the long run? The underperforming skaters, or the overperforming goaltenders? If it's the goaltending, Montreal could end up a bubble team before the season is out despite their strong start, and with some luck Ottawa could yet pass them.