Share All sharing options for: Five Thoughts for Friday: Saviors and Demons

1. Not a bad debut for Cody Ceci, huh? It's sad that he's on emergency recall, which means he'll be automatically returned to Binghamton when Marc Methot (flu) is healthy again. But, hey, no hurry, Marc. Feel free to pull a Chris Pronger for us.

Seriously, though, Ceci's debut was exactly what you'd want to see from a kid his age. He's 19, so there's a long, long way to go, but he gave the Senators a tantalizing glimpse of what he could be--and it's probably the player they envisioned when they drafted him. If Ceci can deliver that kind of consistency in the near future, Ottawa's back end will be a strength for years to come.

2. Speaking of players on the back end, damn you, Jared Cowen. Finally starting to not suck and you get suspended for two games? What nonsense. Sometimes I feel like at the end of this season, when Ottawa wins the Cup, Cowen will win the Conn Smythe, because the pendulum just has to swing back the other way at some point... But then I just have another drink instead.

So much has been made of Cowen's struggles this year, it feels like any setback is going to undo all of the baby steps forward he's made. If the Senators are a fragile team, Cowen just has to be their most fragile player. I have my doubts that a suspension will really shake his confidence or affect his game too much--let's face it, there's not much to affect--but part of me wonders if Cowen isn't just wishing that this season were over at this point. I'm sure he'd like a do-over and clean slate to build off of. Even if he plays well the rest of the way, he's going to be dogged by questions for the foreseeable future.

3. Last year, I hated our power play because it followed a predictable pattern: 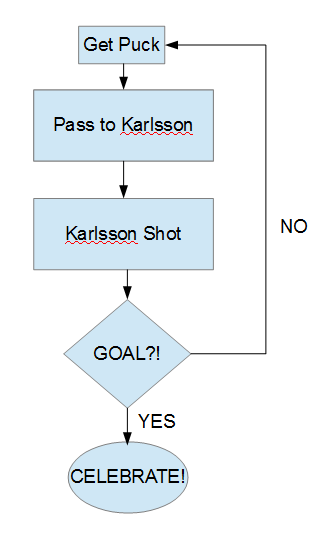 But man, I swear on the lives of all my cats, if we could get Karlsson handling the puck on the power play more often this year, I would be so happy. I don't know how many shots Karlsson had on the power play last night, but whatever the number, I don't think it's enough. And I never thought I'd say that after how one-dimensional we looked last year. But... whatever. Karlsson's too dangerous to be underutilized when the power play is struggling.

4. I think if I'm Paul MacLean, I'm definitely worried about what other teams are going to see when they watch the film of these last two games against Buffalo, because if I'm an opposing coach, I'm telling my entire team to line up on the blue line any time Ottawa tries to start a rush. "Let them dump it in, boys," I'd tell them. "They're not going to get it back."

5. I can't be the only one who saw this last night, right?

HEY YOU GUYS! No, I don't feel bad about this. His eyes are so lopsided! I can't unsee it now.