October 13th - Loss, 7-1. Outshot 39-16(!). Anderson sucks! Our defense sucks! Should we start thinking about some trades to plug these holes?

Of course, the next five games, the team went 0-5-0. But that's kind of the point. We've been here before. In small chunks, any team can look great or awful. But taken as a whole, the season is the cumulative effect of multiple miniature streaks. In fact, if you charted the 2011-12 Ottawa Senators season (whose start we just chronicled) in terms of games over .500, it would look something like this: 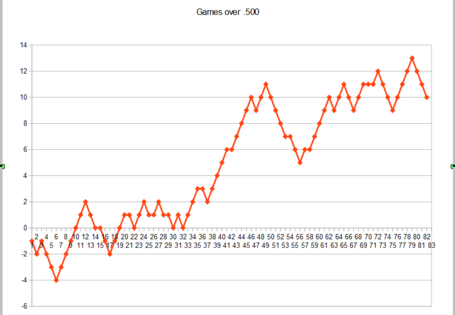 And if you compare this team to that one, they're not even in the as deep a hole: 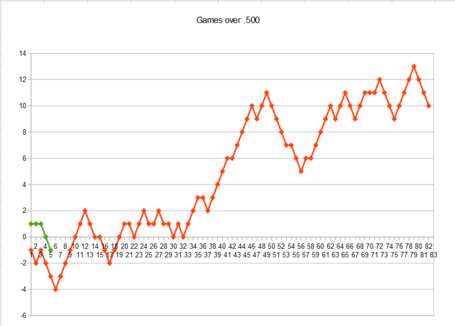 This, of course, does not mean that the 2013-14 Ottawa Senators will magically right the ship and make the playoffs like their 2011-12 "Destined for a Lottery Pick" counterparts did. Like that team, this team has some serious flaws to fix. There's no guarantee they'll be able to. But we do know, in this case, that the team is more talented (at least on paper) and has a staff in place that has corrected course before.

Bottom line: Despite a disappointing start, the team isn't out of runway quite yet.