Silver Nuggets: Zibanejad is not the answer

Mika Zibanejad is likely to get called up soon, but it's not going to make much of a difference.

Share All sharing options for: Silver Nuggets: Zibanejad is not the answer

I'm not one who worships at the altar of advanced statistics--people are not robots, after all, and cannot be reduced to math (just ask Alan Turing!)--but I do believe they can help us put context to certain situations. In this case, they tell us that to a man, the Ottawa Senators are getting beaten. Per the excellent Extra Skater, here's a look at the team's Fenwick For when games are close over the past five games (Fenwick looks at shots and missed shots, but does not include blocked shots): 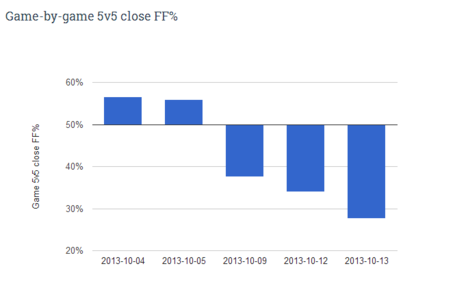 It's plain to see that while games are still winnable, the Senators are getting outshot--badly, and it's getting worse. This is important, because the shot differential has become so imbalanced that the team is beyond the point where one player, even a great goaltender, is going to make a difference. Whether or not you agree with advanced statistics, I think everyone would agree that it's nearly impossible to win when shots are almost 2-to-1 in favor of your opponent. In those situations, the rare win comes at the hands of an exceedingly impressive performance from the goalie--we often say that goalie X "stole a game," an outright acknowledgement that the winning team did not deserve to win.

Well, the Senators haven't deserved to win, and the shot numbers bear that out.

Among forwards, just seven of the thirteen skaters have a shot differential that is even or favors them. Among defensemen, only Erik Karlsson and Joe Corvo are taking more shots than they allow. Jean-Gabriel Pageau, who played a little over three minutes last night has been on the ice for 36 shots against, with just 17 for--worse than 2-to-1! Replacing him with Zibanejad won't change the fact that Zibanejad's linemates and defense pairings would still be putting up similarly putrid shot numbers. It's like throwing one life preserver to 17 drowning people.

Right now the Senators are facing a barrage of shots--too many for the team to overcome. Correcting that problem, then, must be a team effort. When an entire team is underperforming, changing out one player simply won't make a difference. We saw that last night with Robin Lehner.