Andre Petersson can score goals. He can put up points. He's already made his NHL debut, and he was only 5 points shy of leading the Binghamton Senators in points last season. But his 2012-13 has been a bit of a disaster.

Last spring, Petersson was ranked #15 on our Top 25 Under 25 list. We could rehash last year's excellent article on Petersson, but we're not about copying and pasting here. The main points are all the same (plays in Binghamton, scores more goals than assists, drafted late, not very big, and he's Swedish), but surely he's had some progress in the last year, right?

Well, actually, 2012-13 has been nothing but a giant speed bump for him. After coming over from Sweden and a successful AHL rookie campaign in 2011-12, Petersson was hoping to take a bigger role with the Binghamton Senators. Then three things happened:

1. Binghamton's roster was a little more stacked thanks to the NHL lockout.
2. Petersson put up points at a considerably slower rate than 2011-12.
3. He then suffered a hip injury requiring season-ending surgery.

Okay, so not a great followup campaign. He had considerably less ice time once Mark Stone, Jakob Silfverberg, and Mika Zibanejad came to town, and thanks to a poor start statistically he never got back into the top-six like many expected. Then came the hip injury shortly before the end of the NHL lockout, right when Binghamton could've used him the most.

None of this sounds great. So why is he ranked #16? Raw talent. The kid has it, and we still believe in him.

But let's look at his 2012-13 season and how it compares to his other three pro years: 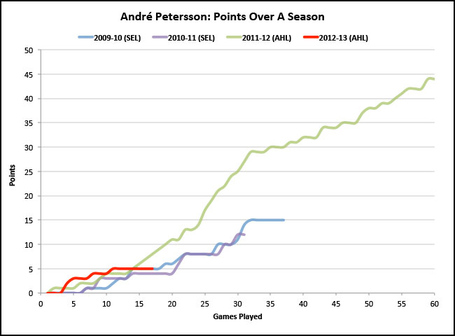 The key here is the red line representing his five points in 17 games this season. While it sounds horrible, the graph indicates that Petersson has been a slow starter throughout his entire pro career. Around the 13-15 game mark in all four seasons his numbers have been very consistent, and it's reasonable to assume that had he not suffered a season-ending injury, he'd be putting up points somewhere between his SEL pace and rookie AHL season pace. His statistics from last season are slightly skewed by an enormous leap between games 25 and 32, a stretch through the entire month of January where Petersson put up 15 points in just 8 games. After that he tailed off with another 15 points - but this time in 28 games.

That one month does show that Petersson has the ability to be a difference maker. In a season where the Binghamton Senators won only 29 of 76 games, they were 4-4 during Petersson's magnificent January. He's more than capable of putting up numbers, and that's what the Senators organization (and Silver Seven) like about him. There's every chance that his sophomore slump is just a fluke and he'll get off to a hot start in 2013-14.

And did we mention he scores goals? 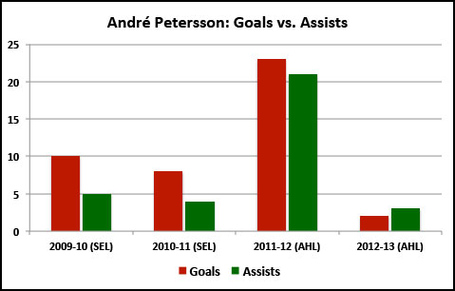 So what does Petersson's future hold? That's really up to him. Even with the talent, Petersson's got some stiff competition. We've already covered how he was bumped down the depth chart in Binghamton this season, and unfortunately for him those players who took his spot are fighting for the same jobs with the big club. If Petersson wants to make it in Ottawa, he'll need to outplay Zibanejad, Stone, and even guys like Stephane Da Costa and Mike Hoffman. It's not an easy task.

Likely probability? Petersson returns to Europe or gets a shot on an NHL club with a weaker talent pool. That doesn't mean he can't make the Ottawa Senators, but it's not likely. Still, that ability to score goals in bursts is rare and what makes him so tantalizing. And it's that potential that makes him #16 on our Top 25 Under 25.