The Sens are still perfect after beating the Panthers for the second straight game.

The Senators rolled into Florida 2-0 for the season and fresh off a 4-0 win against these same Panthers on Monday night. Despite early pressure in the Florida end, the Panthers got on the board midway through the period with a Thomas Fleischmann goal while Sergei Gonchar was sitting in the penalty box. Florida provided an opportunity for the Sens to get back in the game immediately; two quick penalties led to a 5-on-3 powerplay for Ottawa. And while both Karlsson and Latendresse had excellent chances to tie the game up, it was powerplay specialist Chris Phillips floating a knuckler past Jose Theodore at the tail-end of the man-advantage to tie things up. Despite outshooting the Panthers 16-7, successive penalties to Jakob Silfverberg and Daniel Alfredsson stymied any momentum generated by the Phillips goal and the period ended in a draw.

The second period began with more energetic play from Ottawa's third line. Colin Greening built off his first period performance, creating more chances he couldn't put away. After a tremendous save by Craig Anderson on yet another Ottawa penalty kill, Erik Karlsson scored an absolutely beautiful top-shelf snipe to put the Sens ahead. It was effortless. The heads-up interception which stopped the Panthers breakout in its tracks, the pause at the blue line to wait for his teammates to get onside, the rush past former teammate and current pylon Alex Kovalev, the quick-fire release, and the finish - all were breathtaking. Still, the Panthers generated several chances and poor execution by the opposition as much as timely saves by Andy kept the Sens in the lead.

The third period was similar to the first two: chances exchanged by both teams and timely saves from goalies Anderson and Theodore to keep things close. The third and fourth line continued their strong, energetic play. Midway through the period, Guillaume Latendresse had a breakaway, but was hauled down by Brian Campbell and the new Senator was awarded a penalty shot. However, the execution left much to be desired as he lost control of the puck after a slow approach and good friend Theodore stopped him from going five-hole. Jason Spezza got off the mark with an empty-netter for his first goal of the season. Senators win 3-1. Shots 37-26 in favour of Ottawa.

Made some timely saves when called upon. Has let in two goals in three games. Has insanely good numbers right now.

Yes, he scored an awesome game-winning goal. But he is such a good player. He made several awesome passes look simple. At the ripe old age of 22, he's an incredibly mature player at both ends of the ice. That goal demonstrated his natural talent, his hockey smarts, and patience.

While his scoring and points streaks were snapped, Turris put in a strong performance again. Physically much stronger this season, the fruits of his summer work-outs are evident in the game he's playing. In addition, he's playing with a lot of confidence right now - his behind the net wrap-around attempt in the second period was a play only a confident player attempts. Through three games, he's been Ottawa's best forward.

He scored. On the powerplay! When Big Rig notches a goal the Sens usually win: the team is 47-11-4 when he scores and that's good enough for me.

Showed flashes of potential - he had a chance in the first as well as a breakaway in the third period - but he still looks a couple steps behind everyone else. Maybe he hits his stride in a few games, but in a shortened season patience might be hard to come by. 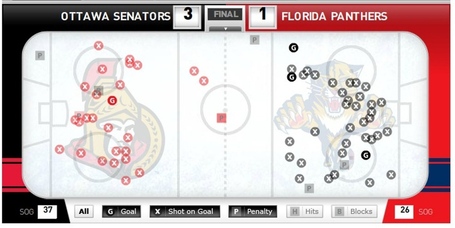