Share All sharing options for: Turris nets two as Senators win 4-0 over Panthers

The second game of this Ottawa Senators season was a tale of three very different periods -- the first saw the Ottawa Senators completely dominate the Florida Panthers, the second period was about even (although I'd give Ottawa the edge), and the third period had the Senators on their heels. The game, in graph form, was kind of like this:

I'll explain the little bump at the end later, but that graph counts as advanced stats, right? WE'RE ON THE CUTTING EDGE OF ANALYSIS HERE.

The first goal of the game was a powerplay marker, with Kyle Turris one-timing a pass from fellow BC native Patrick Wiercioch. It was a nifty display of patience from Wiercioch, who held onto the puck and walked it along the line before sending a beautiful diagonal pass to Turris, who took a bad angle shot but still slipped it in past Jose Theodore. The Senators dominated the period, outshooting the Panthers 18-4 in the first frame.

The second period was a more even affair, with the Panthers outshooting the Senators but not getting anything to show for it. It was also a physical period, including a short tussle: Zack Smith took offence to a rather hard Keaton Ellerby hit, and although Chris Neil tried to step in, Z. Smith sent him away and took on Ellerby himself. A few minutes later, Kyle Turris scored his second goal of the game after he and Guillame Latendresse executed a gorgeous give-and-go that gave the Senators a 2-0 lead.

The third period was about 17 minutes of the Senators sitting too comfortably on their lead while the Panthers pounded Craig Anderson with shots (15 in the period alone), until a funny thing happen -- that little bump at the tail end of the graph up there. With under 3 minutes to go, Jim O'Brien caught up to a loose puck and batted it past Theodore (not dissimilar to how Milan Michalek scored on Saturday night) to give the Senators a 3 goal lead. About a minute and a half later, Jason Spezza made a nifty pass out front to a wide open Jakob Silfverberg who showed his quick release with a puck that fooled Theodore to give the Senators a 4-0 win.

Sens Hero: Kyle Turris
With his two goals tonight, Turris now has three in just two games. But more importantly, he's carried both Daniel Alfredsson and Guillame Latendresse through those two games, as neither Alfie nor Latendresse have looked like they are fully comfortable with the speed of the new NHL season just yet. Turris is certainly earning that $1.4M cap hit this season.

Sens Hero: Craig Anderson
Anderson made 31 stops to get the shutout tonight, and he did so with very little help in the third period. Although the Senators did a good job of protecting Andy, he did take a few hits from the Panthers offense and still maintained his composure, looking poised as he kept rebounds to a minimum and made a number of timely saves. Another great performance from a guy who some thought shouldn't have been the starter on opening night.

Sens Hero: Patrick Wiercioch
Wiercioch is starting to look more and more comfortable out there for the Senators, and his cross-ice pass to Kyle Turris was a thing of beauty. Wiercioch also had 2 shots on net and played 12:48.

Honourable Mention: The third line
The third line of Z.Smith, Colin Greening and Chris Neil gave the Panthers fits tonight, outworking and outhitting the opposition while keeping the puck in their zone. Z. Smith in particular had a heck of a showing, getting 4 shots and 3 hits, while Neil had 2 shots to go with his 5 hits. 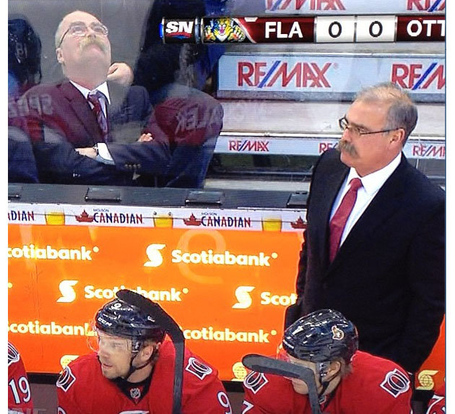 This guy went viral minutes after the game started, and for good reason -- it's an uncanny resemblance. I think my favourite part is that, according to Ian Mendes, Paul MacLean didn't even see him there. Makes you wonder if this was because MacLean was too dialed into the game in front of him or if he just thought he was looking into a mirror.