This mini-series looks at some of Northern Ontario’s hockey shrines.

The Hockey Hall of Fame is the most famous museum dedicated to hockey and presents one type of hockey history. But it’s far from the only hockey museum and there are unofficial histories to be told and individuals to highlight in hockey’s other buildings.

"The town that made the NHL famous" according to legendary broadcaster Foster Hewitt, has preserved its hockey heritage and that of northeastern Ontario at Hockey Heritage North, a purpose-built facility dedicated to the frozen game.

Hockey Heritage North is a 17,000 square foot hockey museum and exhibition centre in Kirkland Lake, Ontario. Opened in 2006, the facility focuses on the contributions players from northeastern Ontario have made in the NHL. Kirkland Lake is an appropriate location for the museum, as the small mining town boasts more than 40 NHLers among its famous citizens.

The museum has its roots in Kirkland Lake's Museum of Northern History, but its hockey holdings were too extensive and required a separate building. HHN established a foundation in 2008 to help cover the museum's operating costs and new exhibitions. As result, you can now see the World's Largest Free-Standing Puck when you visit HHN. It was unveiled on the grounds of HHN in 2012 in an effort to raise funds for a monument to the more than 300 NHLers from northeastern Ontario.

The museum's exhibitions chart the history of hockey from its earliest days to its modern players. 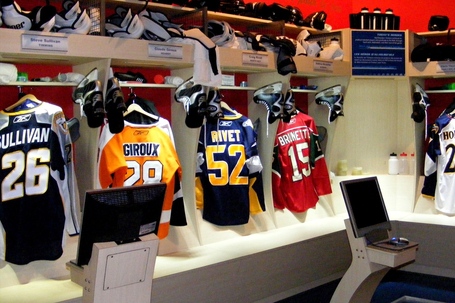 HHN illustrates the connection between hockey (a favoured community leisure activity) and mining (the reason many northern towns were established). Mining may have been the reason for many communities, but the industry and its subsidiaries often financed the game; sponsoring teams and building facilities were just some of the ways mining aided the northern game. Mining also proved an inspiration for many players. With few future employment options, many storied NHLers chose hockey instead of a career spent underground. The museum also illustrates the dominance of players from northeastern Ontario in the Original Six era and their decline in numbers during the modern era because of the many difficulties faced by players in the area now. 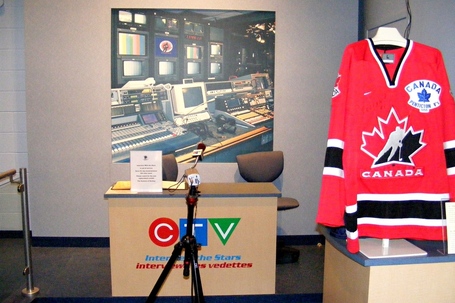 Above: one of the many interactive exhibits at HHN

One of the most popular spaces in the Hockey Hall of Fame is the interactive area where visitors can test their hockey skills. In this regard, HHN does not disappoint. Kirkland Lake's museum also has a Fun Zone, an interactive section geared to kids but suitable for all ages. The area includes table hockey games and video games, but also includes an accuracy shooting range as well as providing the opportunity to test how fast your shot is. Playing not your speed? Try your hand at sports broadcasting from behind a CTV news desk.

The museum's exhibit space concludes with an impressive Hall of Fame room called the Gold Hall. 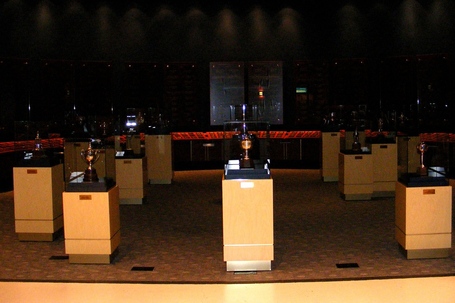 Above: the Gold Hall, a Hall of Fame-type room commemorating the HHN's Honoured Members 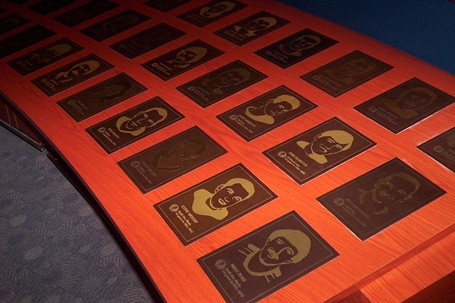 Above: Several of the over 300 plaques of HHN's Honoured Members, Gold Hall.

While not as big as the Hockey Hall of Fame in Toronto, Hockey Heritage North is a unique resource which contains the largest hockey holdings outside of the HHOF and is worth a visit for those traveling around Kirkland Lake.

Next in the series: "The Northern Ontario Hockey Tour Part 2: the Bobby Orr Hall of Fame"