Although we can probably expect the full schedule this weekend, part of the home schedule as well as some planned promotions were leaked on Friday night.

Courtesy of Sens Town and Twitter user @Gilles84, below is the first glimpse of the Ottawa Senators' 2013 home schedule--including a look at what some of the promos could be: 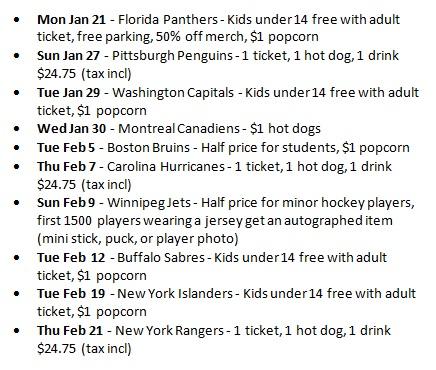 Although there's likely more that could have been done with promotions, I think these are pretty good ones; $25 for a ticket, hot dog, and a drink is a deal as good as any you'll normally find around the league, so three of those promos right away is pretty solid. It looks like the Sens are likely to have a fairly major promotion every home game, which is probably a wise move.

One thing that stands out here: The team's definitely strategically targeting families and kids in particular. This makes sense for a number of reasons. For one thing, kids under 14 probably aren't as angry or apathetic about the lockout, so they'll still be nagging their parents for a chance to go to games. These promos makes it relatively cheap to do so.

The rest of the schedule is expected later today (Saturday), upon ratification of the CBA by the NHLPA. After that, we'll likely hear a bit more about the team's promotional considerations for the season. This is undoubtedly a first glance at what the Sens are going to do to hype the game and off-set the post-lockout blues, so expect more--not just for direct ticket purchasers, but also involving community outreach events.