The Senators entered the Windy City hoping Bobby Ryan's return to Jason Spezza's wing could spark the top line and help Ottawa finish a disappointing month with a victory against the defending Stanley Cup champions. Offsetting roughing minors to Sheldon Brookbank and Zack Smith allowed the teams to play 4-on-4 hockey. Erik Karlsson made the most of the extra space, twice setting up teammates for tap-ins that were turned away by Nikolai Khabibulin. A Chris Neil high-sticking penalty put the Sens on the penalty kill and Chicago quickly converted. Andrew Shaw tipped-in a Patrick Sharp slapshot 9 seconds into the PP to put the Hawks ahead. While the Sens third line pressured Chicago after conceding, the game settled into a rhythm, as the teams exchanging occasional chances. A late 2-on-1 for the Hawks led by Jonathan Toews was stopped by Craig Anderson and the Sens were able to capitalize on the counter attack. The mostly-invisible Milan Michalek picked up a Bobby Ryan drop pass in the slot and wristed his third of the season past Khabibulin. The period ended tied at one and was a successful road effort for the Sens.

The second period began with the Sens trying to build off their late first period goal. Early in the period, Clarke MacArthur drew a tripping penalty and Hawks defender Brent Seabrook went to the box for two minutes. The first unit moved the puck well and had a couple of chances, but it was the second unit crashing the net that led to a Sens PP. MacArthur took an outlet pass from Karlsson and drove hard to the goal and Kyle Turris put the puck in during the scramble. Unfortunately, the lead was short lived. A bad Ottawa change led to a 2-on-1 for Chicago. Toews fed the puck to a waiting Marian Hossa, who, despite Cory Conacher's desperate back check, was able to put the puck past Craig Anderson. The Sens regained the lead on a slapshot from the point by Joe Corvo. It was a good forechecking shift from Michalek and Ryan, who worked the boards behind the net to move the puck back to Spezza who fed Corvo. Ryan also provided an excellent screen on the play; Khabibulin most likely didn't see the shot. Less than a minute later, Mika Zibanejad worked his way into the Chicago zone and wristed a weak shot past the Hawks tender. It was a poor goal, ending Khabibulin's night early and Corey Crawford came on in relief. The Sens scored 3 goals in less than 5 minutes and continued to push the play.

The Sens should have been in control of the game, but a Michalek hit changed the tone of the period. Trying to contain Hawks captain Jonathan Toews, the winger instead ploughed into his goalie Craig Anderson, kneeing the netminder in the head. Andy, slow to get up, had no chance on the ensuing wraparound goal by Toews. The goal made it 4-3 for Ottawa, but immediately after the Toews goal, Ottawa went a man down and was on the penalty kill. While Chicago had a few chances, the best chance on the Hawks PP was a Spezza breakaway. Crawford came up big, stopping Spezza and Michalek was unable to get to the rebound before it was cleared by the Hawks. The period ended with two good Chicago chances, but Andy came up big on both occasions. First by stacking the pads on Sharp, who broke into the Ottawa end after the puck squeezed by Marc Methot at the Chicago blueline. Later, he managed to trap the puck against the crossbar after Patrick Kane attempting to flip it over the prone goalie. While Chicago was energized by their second goal of the period, Ottawa was the stronger team in the second, and the period ended 4-3 in favour of the Sens.

Chicago tied the game early in the third period when Toews scored a tip-in off a Johnny Oduya backdoor pass. Toews blew past Karlsson on the play; it was a move the Hawks attempted a few times in the second without converting, but the Sens weren't so lucky this time. Twice, Cory Conacher tried to put the Sens back in front. From behind the net, Erik Condra set up the diminutive forward who was all alone in the slot, but unfortunately Conacher shot the puck directly into Crawford's chest. A 2-on-1 with Zack Smith followed shortly after, but Smith's indecision scuttled the chance. Midway through the period, Toews completed the hat trick, tucking a Brent Seabrook rebound home, after a nice passing play by the Hawks. The natural hat trick was aided by some coverage breakdowns by the Sens: at the blueline when Chris Phillips lost his stick, allowing the Hawks into Ottawa's zone and Turris on Toews while the eventual goal scorer was in the blue paint. Another defensive zone breakdown, this time featuring a Jared Cowen turnover and a poor rebound from Andy led to a second goal for the Hawks' Shaw. Just 13 seconds later, Zack Smith put a wrist shot past Crawford with just over five minutes left, to make things interesting. The game ended with a flurry of chances, but Chicago was able to hold on for the 6-5 win. Shots 40-37 in favour of the Hawks.

The man nicknamed "The Bulin Wall" provided quite the 80s flashback tonight. He allowed 4 Sens goals and helped kick off a night of high-flying 80s hockey, before inevitably crumbling under the weight of capitalism, David Hasselhoff, and the fact that he's in his 40s.

They weren't prefect, but the much-maligned Spezza line showed some offensive spark tonight. Spezza and Ryan each had an assist and the often MIA Michalek had a goal and an assist. They looked particularly dangerous in the second period, with Ryan and Michalek executing a dominate cycle and Spezza and 9MM generating multiple chances on the PK. There's still a lot of room for improvement, but this was better.

While MacArthur can't buy a goal right now, he had some of his best chances for his first in a Sens sweater against the Hawks. He did all the typical MacArthur things as well as drove the net hard tonight, creating the Turris goal. He was rewarded for his efforts with two assists.

Wiercioch was coming off a tough week. Scratched against the Wings and Ducks last week, he finally made it back into the lineup against San Jose. Not partnered with Jared Cowen, he looked much better in terms of positioning and playing the puck. While his pairing with Chris Phillips was not flawless, it was a big step in the right direction for the sophomore.

Andy wasn't horrible, but he did give up 6 goals. He made some big saves, particularly at the end of the second period, but he also gave up several juicy rebounds. The Sens didn't do their goaltender any favours, giving up 40 shots, but Andy's .850 SV% isn't acceptable.

Wow. He was bad. Really, really bad. Cowen hasn't had a good start to the season (the Cowen-Wiercioch pairing hasn't delivered) but tonight was a new low. He's struggling with most aspects of his game right now, but his inability to play the puck really let him down against the Hawks. Hopefully things can improve soon because if this continues the weight of his new contract is going to multiply.

Ugh. Toews scored a natural hat trick by potting the goal that got the Hawks within one, the goal that tied the game, and a goal which put them ahead. He also got the primary assist on Marian Hossa's goal that tied things at 2. Basically, Toews completely changed the game. His first goal was the turning point of the night, getting the Hawks back in a game the Sens had comfortably taken over.

Shaw didn't have as flashy a game as Toews, but he scored twice, including the eventual game winner.

In relief of Khabibulin, Crawford played almost thirty minutes, giving up just 1 goal on 15 shots. He made a few keys saves and shut the door on the Sens. 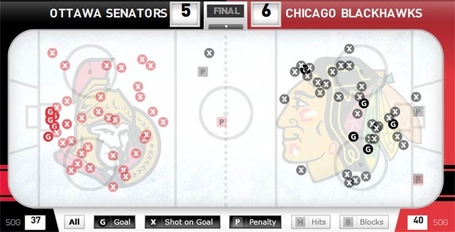