Game 4 was a must win for the Senators. Down 2-1 in the series after losing a heart-breaking Game 3 in which they thoroughly outplayed the #1 seeded New York Rangers, Ottawa needed to even things up. After his setback on Monday afternoon, it was unlikely Alfie would play in Game 4 and his absence during the warm-up confirmed that fact for Ottawa: we would be without our captain for another game.

The Sens got behind early in the first when a Zack Smith offense-zone penalty gave the Rangers a powerplay 39 seconds into the game. The Rangers got their powerplay going quickly, as Anton Stralman scored his second goal of the series on a rebound which the Sens could not get a hold of. Ottawa's penalty trouble continued when Erik Karlsson was on the receiving end of a weak neutral zone tripping call. Once again the Rangers capitalized. Rangers captain Ryan Callaghan gave his team a two-goal lead on a wrist shot from Gaborik and Richards. Toward the end of the period, Ottawa picked up the intensity and the traffic in front of the net and started to generate some chances. Frustrated by New York's shot blocking and by the battles the refs were allowing in front of the net, Ottawa was unable to put one past Henrik Lundqvist.

The second period started with some good pressure by the Sens, but five minutes into the period Matt Carkner took a hooking penalty. Once again on the penalty kill, the Sens were able to hold the Rangers at bay despite pressure from New York. And then the momentum changed. As Carkner's penalty was expiring, Jason Spezza played a breakout pass from beside his own net across the ice which hit Carkner perfectly as he stepped out of the box. Carkner advanced into the zone, settled the puck down, and was composed as he played the puck to Milan Michalek, his partner on the 2-on-1. Michalek wasted no time roofing a backhand past Lundqvist and sent the Scotiabank Place crowd to its feet. Later in the period, a holding penalty to New York's Bickel put Ottawa on the powerplay and while they didn't score, they kept the pressure on the Rangers. Near the end of the period Artem Anisimov received a weak hooking call and Ottawa was on the powerplay again.

And then the momentum changed again. Jason Spezza dangled into the Rangers zone and New York defenseman Marc Staal laid a slash across his hands driving the deking Spezza lower to the ice. Staal then knocked Spezza to the ice on a questionable hit. While Spezza was skating somewhat bent over, Staal's hands extended into Spezza's head. Seeing Spezza crumpled on the ice, visions of Alfie from Game 2 still fresh in our heads, was not a welcome sight. Seeing Spezza hunched over, heading straight to the dressing room was even worse. But no sooner had Spezza made his way off then Gonchar answered. Still on the powerplay, Gonchar slapped home the tying goal through several red and white shirts. This goal was huge: going into the third period tied instead of leading makes a huge difference to a team as defensively-minded as the Rangers.

The third period solved nothing. However, Jason Spezza made his way to the Ottawa bench to start the period to the relief of all Sens fans. New York started the period strong, pressuring Ottawa in their own end. The Rangers went on the powerplay early in the period when Nick Foligno was award a weak high-sticking penalty. Once Ottawa killed off the penalty, Spezza was able to return to the ice after the kill and try and get the offense going. In the second half of the period Ottawa started to increase their pressure, but another Nick Foligno penalty forced the Sens to make another timely kill late in the game. The last few minutes of the period were all Ottawa and the Sens desperately tried to pull ahead before overtime, but to no avail.

Overtime started with Ottawa scrambling in their own end. The Rangers brought lots of pressure to start the period and Ottawa gave up a few good chances. Kyle Turris' line had been on the ice for over a minute when he made a strong defensive takeaway and then fed Jim O'Brien with a pass to break out of the zone. O'Brien gained the red line and rather than dump it in to get a change, proceeded into the New York zone with Turris. O'Brien made a Spezza-without-the-giveaway-drop-pass to Turris who snapped the puck through the defenseman's five hole, as he went down to block the shot, and into the top corner of the net behind a screened and stunned Lundqvist. Senators win 3-2 OT. Series tied 2-2. Shots 33-31 in favour of the Rangers.

Continue reading for heroes and zeroes.

Anderson made 31 saves, many of the amazing variety. While Ottawa went down early, Andy kept the Sens in the game and gave them a chance to tie and win it with his play. When the game was tied in the third, Andy made a highlight real save by diving across his crease and knocking down the Ranger shot while in an unorthodox position. While the 11 minute-mark "Alfie!" cheer rang out from the Scotiabank Place crowd every period, they also chanted Andy's name.

The man. The myth. The legend. If Carkner hadn't dressed in this series his place in Ottawa lore would have been secure because of his OT game winner from the 2010 playoffs. But Carkner's been adding to his myth. In his first game back from his suspension, Carkner got a big assist on the first Ottawa goal, getting his team back into the game. The most important part? He played it cool and got the puck to the man who led the team in scoring in the regular season instead of trying to do too much on his own.

Turris scored his first of the series and the overtime winner. He has been close a few times already in the series, narrowly missing out on a few goals. This time he made no mistake and wired home a shot that beat Lundqvist and evened things up.

Many (including me) have dumped on Gonchar for his resemblance to a traffic pylon on several defensive plays already in the series. But his goal to tie the game was huge. Ottawa went into the third period tied because of Gonchar and his goal forced the Rangers to attack in the third instead of just playing a suffocating defensive system.

O'Brien had a good game, contributing offensively and generating chances in the second and third periods. Instead of dumping the puck into the New York zone after a long shift in his own end, O'Brien gained the zone and dropped a perfect pass to Turris on the game winning goal.

Yes, he's still trying to do too much. Yes, he's had too many giveaways and hasn't taken enough shots. But you know what? Spezza got his team back into the game with the great (if risky) pass which sprung Carkner. He got on the score sheet and hopefully this point can help get him going.

Ottawa killed off the remaining New York powerplays after going down by 2 goals, but the Sens penalty killers cannot afford to spot the Rangers - and Henrik Lundqvist - an early two-goal lead at Madison Square Gardens on Saturday if they want to win the game.

Gaborik and Richards had two assists each, setting up both of New York's powerplay goals. Ottawa cannot afford to have these two players get hot nor can they afford to have the Ranger powerplay build on their successes from the first period if they want to win this series. 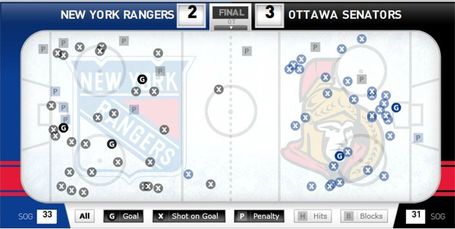