posted by Peter Raaymakers about 3 hours ago

posted by Peter Raaymakers about 16 hours ago

The bowels of ScotiaBank Place are not unlike the Control Center level of Doom, but with less toxic waste and slightly fewer demons trying to kill you. It was thus that I found myself wishing I had a shotgun as I realized I was impossibly lost.

After getting a few funny answers from Henrik Lundqvist and Brian Elliott about their desire to stop a Zdeno Chara shot after watching him break the hardest shot record, I headed out to see if I could find Peter.

Out of the corner of my eye, I caught sight of a well-dressed man with longish hair and the blonde stubble of a weekend without a razor.

It was Milan Michalek.

Realizing my opportunity for a dream interview had just walked by me, I decided to upgrade our original plan to something that would make me a comedy legend on Silver Seven, and quickly headed after Michalek, hoping to stop him.

But Michalek knew his way around, and I most certainly did not. After a few minutes of not being able to find him, I figured I would double back and try to catch some other player heading out and follow them—presumably to where Michalek had gone. Several tense minutes later, I was making a pact with myself not to get lost in the future without some kind of weapon.

The sound of footsteps approaching from around the corner snapped me from my daydream. I was saved! If it was Michalek, I’d still get my interview. If it was some jerk from the staff, I’d just play it cool like Arnold and find my way back to the locker rooms.

And then I saw him.

It was a man in an impeccable grey suit. His dirty blond hair was mussed in a way that only a European would consider stylish, and his skin was so pale that girls from Team Edward would have swooned if they even got a glimpse it. But it was his sunken, red-rimmed eyes that transfixed me.

Those eyes! They burned with a pale orange fire that was inhuman. I could feel my legs weaken and I suddenly felt as if I was held up by an unseen force. I wanted nothing more than to look away and run in fear, but I was compelled to continue staring. The man laughed, and the temperature of my blood dropped several degrees. Then he spoke.

He reached out and put an object in my shirt pocket. I was still powerless to move my limbs. I could not have stopped him if I wanted to.

I wanted to ask him how I would know, but I was unable to speak. He walked away, and when he was out of earshot, control of my body returned to me. I reached into my pocket to pull out a fortune cookie. A fortune cookie, which, until yesterday, I was physically unable to open. Believe me, my head wanted to--but every time I tried, my hands stopped working.

In desperation, I used my moderator powers to look up an email address. Having no other recourse, I needed to get in touch with him (click the images to expand):

To my surprise, he responded.

It said, "Many apologies, but cannot remember everyone. Can only tell you truth: Is always time if you want bad enough." Well, I wanted it bad. I opened the fortune cookie. 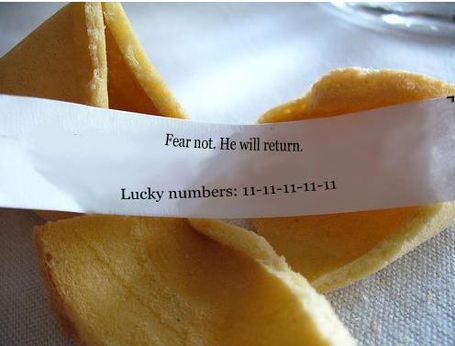 Overture: A dose of truth

Let's hope for a hockey game and not a brawl tonight, right?

Head to head: Some stats no one reads but I'll keep writing anyway

And if you're wondering where all the cool kids hang out these days, it's in the comments section. JOIN OR DIE.