posted by Peter Raaymakers about 23 hours ago

To say that Canada did not welcome me with open arms during my recent visit for the All-Star Game would be an understatement. Upon arriving at Customs in Toronto, I was immediately grilled with more questions than I have experienced anywhere else, even Texas.

Why was I there? To cover the All-Star Game. (The agent was unimpressed.)
How long was I staying? Just two days.
What was the name of my hotel? I wasn't staying at a hotel.
Where was I staying, then? With one of my friends, a fellow writer from our blog.
What was this "friend's" name? Peter Raaymakers. (Sorry, Peter.)
What's this "friend's" address? I don't know, somewhere in Ottawa.
Was that my final destination? Yes, that's where the All-Star game was.
Was I transporting any weapons or chemicals? No, just me. (MY HANDS AND FEET ARE LETHAL WEAPONS)
What's the duration of my stay? Still two days.
Have a great trip. Thanks, go Sens go.

It was then time to have my bags and all their contents opened and thoroughly inspected, and my hands swept for explosive chemicals. America doesn't want to destroy you, Canada. We just want to watch the game.

Later that night, as Peter and I were waiting for the bus to arrive to take us home, we had a discussion about what to do if I couldn't find my day pass: I would get on at the back, hoping the driver wouldn't check to see if I had one.

I never got the chance. As Peter climbed in the front, I went to get in the back. Two seconds is apparently the limit to get on the bus, a fact I learned as the doors closed in my face.

No reply. I was stranded in Ottawa at midnight with no knowledge of the city and no idea when the next bus would come--or if it would take me home.

"What now, indeed?" I muttered to myself.

"Don't worry," came a voice from behind me.

It was a stunningly beautiful woman. Dressed all in white with jet black hair, she had apparently appeared from nowhere. I was so startled that I couldn't speak. She reached her hand out to me.

"Your friend will be right back," she told me. "In the meantime, take this."

It was not a bus pass. It was a fortune cookie, one of two I would collect that weekend. 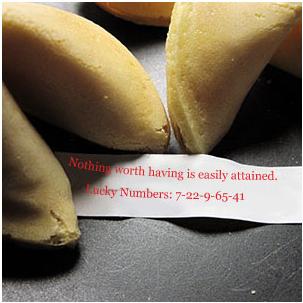 I glanced away at the sound of Peter's voice. When I looked back, she was gone.

Overture: I swear I am not making this up

There's been plenty written about what the Senators need to do better if they're going to win a game, much less the series, but it's very straightforward. Let's watch Daniel Alfredsson's goal from game one:

What do you notice about that? If you answered, "Alfie scored from right in front of the net," congratulations--you are smart. The bottom line for the Senators is this: they cannot expect to beat the caliber of goalies they'll be facing in the playoffs with shots from far away. They need traffic in front of the net. They need to pay the price to get there. The team put together an impressive surge in the second period of Thursday, but the shot chart for that period tells an interesting story:

The team only managed two shots after John Tortorella called a time out, so this shot chart is especially telling. There are exactly two shots in close on Lundqvist., and just two more from the slot. That's simply not going to get the job done. Ottawa is not going to win this game--or this series--playing from the perimeter. They need to get in front and score some dirty goals. There's no better way to open up the ice to play their style of game.

Series statistics for the Senators and the Rangers so far:

As always, the only cool place to watch this game is in the comments section, with us. BE THERE.