posted by Silver Seven Staff about 3 hours ago

posted by Silver Seven Staff about 24 hours ago

Today's good omen: The following story is 100% true
When a woman asks you to tell her you love her, what she really means is that she wants you to show how much you love her. I have learned this the hard way. If you simply tell her, you're just doing what she said, and let's face it: "good enough" is no way to stoke the fires of interest. It's like Simone de Beauvoir wrote:

"The knight departing for new adventures offends his lady, yet she has nothing but contempt for him if he remains at her feet."

As men, we can't win. But that doesn't mean we shouldn't try. I contemplated this as I drove to her favorite Chinese restaurant--over an hour away--knowing full well that a gesture like leaving the seat down might be more appreciated than simply picking up one of her favorite meals. But it wouldn't be more romantic. So, I had decided to take my chances.

Arriving at the place, which must remain nameless because I don't share secrets, I placed my order and was told the wait would be quite long. When I testily asked why, the cashier simply gave a nod of her head toward a room in the back. Surrounding a table were the Ottawa Senators. Why they were there, I have no explanation for. I attempted to run over to talk with Z. Smith and maybe Alfie, but the owner of the restaurant, a large man with a large cleaver, gave me a subtle shake of his head, and I decided to heed his advice.

The team was just about finished with their meal, and as they filed out, it was clear that they enjoyed the anonymity afforded to them, so I did not let on that I recognized them. Once the last player, Jim O'Brien, was out of the place, I hurried to the room to see if anyone was a bad tipper before the staff cleaned the table. At the head of the table, where Alfie had been sitting, I found this: 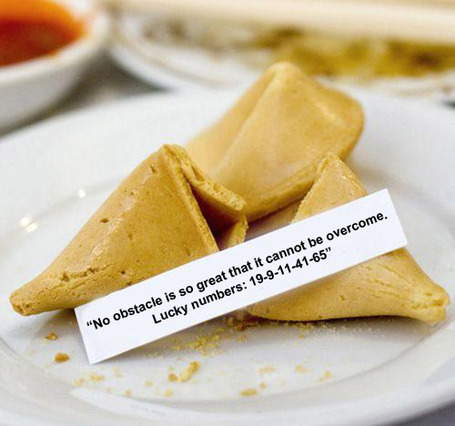 As for my gesture? May the Senators enjoy the same level of success tonight.

Overture: This information is also 100% true
The Senators won the season series against the Rangers 3-1, but that margin is not quite as wide as it seems. One of those wins came against backup Marty Biron and another was a rally from a 4-1 deficit in the first month of the season. Checking will probably be tighter this time around, so a 3-goal rally in the third is less likely should the Senators find themselves in the same position. They also won't have the benefit of the shootout to steal a win in the playoffs.

Throwing those results out, we have one quality win against the Rangers, and one loss. Even Stevens. That's about all the Senators can ask for in a matchup of first and eighth seeds: a chance to win.

Here are the 2011-2012 comparative statistics for the Senators and the Rangers:

As always, you must join us in the comments section if you don't want to be a loser.