You have heard all the expert predictions for the first round of the Stanley Cup playoffs, but really what we all want to know is how do the readers of Silver Seven think the first round will turn out. Well, here is your chance in graphical form. 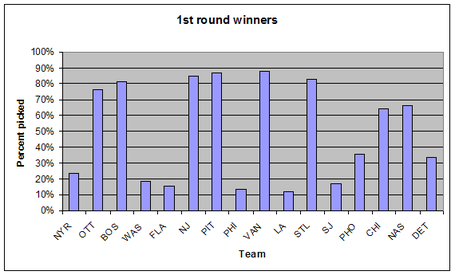 As you can see, we are shameless homers, with the large majority (45 out of 59) predicting Ottawa wins the first round. Out of the 59 people, 58 of them also made a Stanley Cup winner prediction. Pittsburgh leads the way with 18 people backing them to win the cup. Vancouver and Nashville are second at 9, with St. Louis and Ottawa following at 6 each (!!!).

Reminder: Mark will be on Blue Shirt Underground this evening at 9:30pm EST to talk about the first round matchup with some Rangers fans. Click that link if you want to participate!