Share All sharing options for: Senators beat the Rangers 4-1 in dull game

It wasn't an exciting game by any means, but once again the Ottawa Senators beat the New York Rangers at their own game. In the last meeting between the two clubs, the Senators shut out the Rangers 3-0 and it was a similar defensive effort once again.

Ryan Callahan opened the scoring with a tap-in after Jim O'Brien couldn't cover him, but just over a minute later Zack Smith blasted a slapshot past Martin Biron to tie the game. Nick Foligno would score late in the first period to send the Senators into the intermission with a 2-1 lead. The shots were 8-4 for the Rangers, but the scoring chances were 6-5 for Ottawa. More scoring chances than shots on target would imply that the Senators were missing the net from good scoring positions.

The second period wouldn't be a good one for Ottawa. They were outshot 9-3 and outchanced 9-2. Ben Bishop was solid though and made the saves when needed. It was certainly not an eventful period of hockey.

Ottawa would turn things around in the third and extend the lead thanks to a beautiful breakout by Daniel Alfredsson. On the ensuing rush, Kyle Turris put away the rebound to give the Senators a 3-1 lead. The Senators would keep the pressure up and controlled the play for the majority of the period. Jason Spezza added an empty net goal to seal the deal with a 4-1 win. Shots were 26-22 for New York and scoring chances were 17-16 for New York.

Sens Hero: Ben Bishop
In his second game for the Sens, Bishop was a lot better, making all the saves he needed to. He ended up with 25 saves on 26 shots.

Honourable mention: Zack Smith
He finally scored a goal and it was an important one, getting the Senators back into the game right after they had conceded the opening goal.

Honourable mention: Jared Cowen
Solid game from Cowen, playing over 20 minutes including 4:11 on the penalty kill (which is of course the important measure of a defenceman's skill). He was +5 on Corsi and +4 on scoring chances.

Dishonourable mention: Erik Karlsson, Filip Kuba
The Rangers out-chanced Ottawa 10-3 with Karlsson on the ice, and while I didn't think Karlsson had a terrible game, the numbers don't lie. Karlsson was the recipient of many hits and though he did setup some nice plays, he didn't have his usual jump. For Kuba, see the first part I said about Karlsson.

Before I get to the highlights, here is the headline on NHL.com for the Sens game. 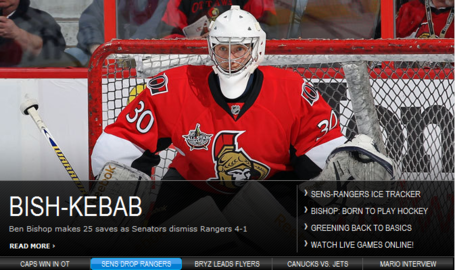