Senators throttled as they drop game to Blackhawks, 2-1

Share All sharing options for: Senators throttled as they drop game to Blackhawks, 2-1

There's not really much to say about this one. The Senators were thoroughly outplayed by the Blackhawks. Chicago was able to attack Ottawa all night long with speed that the young Senators players simply had no answer for. Erik Karlsson, frequently one of the fastest players on the ice, was unable to use that speed as one of his advantages tonight. Though Karlsson joined several rushes, especially as the need for a goal increased, he wasn't able to get the separation he normally does, nor was he able to create any time or space in the offensive zone--he was constantly pressured by Chicago players. The result was that Karlsson's outstanding points streak came to an end.

With Karlsson neutralized, the pressure fell to his teammates, and unfortunately they were not able to deliver. Ottawa's only goal of the game, Milan Michalek's 29th of the year, was the result of a perfect shot beating Blackhawks goaltender Ray Emery: Jason Spezza created a turnover, and fed Michalek, whose quick release and perfect aim beat Emery before he could get completely set. Coming at about the 15-minute mark, it was only Ottawa's fifth scoring chance of the game.

The Blackhawks, meanwhile, peppered Sens goalie Robin Lehner with shots, and though he acquitted himself extremely well in a game in which he did not get much help from his teammates, his positioning was frequently a little wild, forcing him to make desperate, lunging saves.

The lowlight of the night came at the 18-minute mark of the third period, when Ottawa was unable to pull Lehner for almost a minute and thirty seconds because they simply could not gain possession of the puck. Though the team showed significant improvement in their effort level in the third, they simply had no answer for Chicago's speed when the game was on the line. Though the Senators came into the game as the sixth seed in the Eastern Conference and the Blackhawks the sixth seed in the Western Conference, the difference between the two was noticeable, and should serve as a reminder to giddy Sens fans that this is a team just beginning their rebuild.

This season is an extremely positive step forward, but when measured against a contender built on speed and not power, it's obvious the team has some more holes to fill.

Sens Hero: Robin Lehner
While I noted above that Lehner's positioning forced him at times to make desperate, lunging saves, the more important part is that Lehner, you know, made those saves. This game would have been an utter disaster had Lehner not kept his teammates in the game, and they failed him by creating scoring chances about as frequently as triops hatch. He could not be faulted for either goal allowed. For his part, Lehner faced numerous breakaways, and made saves on them all. His moment of the night came on a penalty shot against Patrick Sharp: Lehner had made a breakaway save on Sharp and then stoned him one on one, holding up his glove to tell the world, "You will lose."

Sens Zero: Sergei Gonchar
Hey, speaking of breakaways, you know who had a hand in most of them? Sergei Gonchar, that's who. By far his worst game in a long time, Gonchar seemed especially stymied by the Blackhawks' speed. Still, most of the breakaways weren't about speed, they were about players getting behind the defense. Not sure why Gonchar had such a bad night tonight, but there really seemed to be something off in his game.

Sens Killer: Ray Emery
Emery was not tested much through the first two periods, but when the Senators finally outshot the Blackhawks in the third period 10-5, Emery stopped them all. On a night where Lehner thew out plenty of big saves, Emery matched him when it mattered most for his team. His numerous big saves in the third were the difference between a win and loss, just as Lehner's were for his team.

Sens Killer: Marian Hossa
Only Senators players and former Senators players will be mentioned in this recap, apparently. Hossa, who walked away with the game-winning power play goal, also rang a shot off of the post early in the game. While his center, Patrick Kane, skated all over the ice with impunity, Hossa complemented him by doing what he does best--finding great positions on the ice and taking great shots.

Sens Killer: Patrick Kane
Absolutely dominated the Senators. Got open at will against all four lines, and led all skaters with five shots. With Jonathan Toews out, Kane needed to carry the team, and he did exactly that. Though he was held pointless, he was easily the best forward on either team. Chicago is lucky to have him.

Honorable Mention: Milan Michalek
Tied Kane with five shots on goal, and recorded Ottawa's only goal. Milan tried, but there just wasn't much open ice for him tonight. As a player who primarily relied on his speed, Michalek, like Karlsson, was effectively neutralized when he couldn't simply blow by opponents on his way to the net--his goal practically came from the top of the circle. Not exactly vintage Michalek there.

Missed chances: Deadline mullet acquisition Matt Gilroy, who also recorded his first point as a Senator, had a chance at an open net and missed, instantly joining Erik Condra on my most-hated Senators list. Speaking of Condra, he generated a quality scoring chance, but a falling Zenon Konopka couldn't convert the rebound--he unfortunately batted the puck forward instead of towards the open net. As bad as the Senators looked, they were two unlucky bounces away from a win. 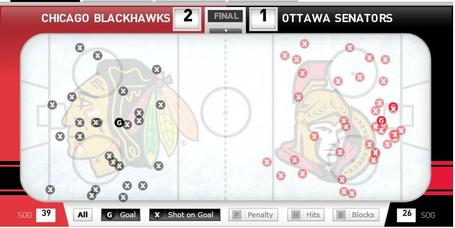