Share All sharing options for: Senators lose to Maple Leafs, 3-1

On a night where they had a chance to take back the division lead, the Ottawa Senators instead turned in what had to be one of their more baffling games of the season.

Truthfully, the less said about this game, the better. There won't be any heroes, and if you're looking for zeros, take your pick. What's most distressing about this game isn't that the Senators lost, but the way they lost. The game was tied at zero after one period, and then Erik Karlsson saw his pass go off of goalie Ben Bishop and into Ottawa's net. The Leafs' Tim Connolly was credited with the goal.

Until that point, the Senators had looked like a calm team despite playing their third game in four nights, with the previous two going to overtime. About six minutes later, things began to unravel for the team, as Nick Foligno fought Luke Schenn, and at the same time, Chris Neil fought Mikhail Grabovski, earning both players game misconduct penalties, and ejections from the game. Those were actually the second and third fights of the game, as Sergei Gonchar got pummeled by Clarke MacArthur in the first, though he came out of the fight--his first since 1998--smiling.

Trading off Neil for Grabovski was the first of many squandered chances for the Senators, as they had a great opportunity to tie the game in the third period while on a 5-on-3 power play. Unfortunately, the best the special teams could muster was a kick-in by Jason Spezza. No room for debate on the motion, and the goal was quickly overturned. This marks Ottawa's fifth straight game without a power play goal. Toronto, meanwhile, was 2 for 2 on their power play, and by the time Colin Greening scored late, it took an insignificant chip away from a 3-0 Leafs lead.

Games like this remind us how far this young team has left to go.

(read on for shot chart and highlights...) 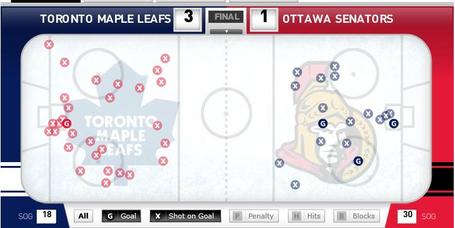 Highlights (if you're feeling masochistic):