Editor's note: User SensForLife11 got to see Alfie play more recently than you did. Here are his impressions from the recent charity game held by some locked out NHL players.

So I made my way out to Cornwall last night to get my "NHL" hockey fix. It was well worth the trip, here's a quick summary of the highlights from my perspective.

- Warmup/game was delayed by around 30 minutes because of the Montreal Canadiens getting stuck in traffic on the way to Cornwall.

- I don't think I've ever watched a warmup as closely as I did this one, it was amazing to see how hard these guys can shoot the puck. It's been that long. 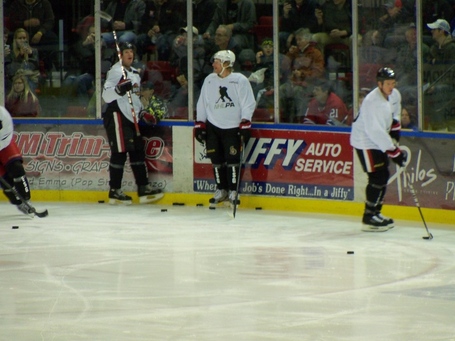 - Every player was given a personal introduction based on what's transpired in their careers, that is except for Marc Methot's brother Matt who got the plain and simple introduction of "Wearing #28 Matt Methot". After an awkward silence, the crowd erupted to cheer for the non-NHL player. Marc had this to say about it:

- Crowd was surprisingly pro-Montreal, with only slightly less fans than Ottawa. There were also a fair amount of Toronto fans spread throughout the arena (continuing the trend of booing when Alfredsson was introduced).

- Loudest cheer was for the local boy Jesse Winchester. Hopefully he's able to land an NHL contract when the season starts back up.

- Once the period it began it was great to finally be watching some hockey with NHL players. Even though they weren't going all out, the game still showed how good these guys are compared to watching the local Ottawa 67s.

- Honestly I think the player that impressed me most was Shaun Donovan. It's obviously a charity game, but he still has hands and wheels putting up a hat trick before the end of the second period.

- Matt Methot fit in pretty well with the group considering he's not an NHL player. I would reckon he even outplayed his brother...

- Overall, the game was simply a display of skill with little defence by either teams. Nevertheless, I'll take what I can get for now and it was great for the city of Cornwall to have some NHL hockey.

- Easily the most entertaining part of the night wasn't the actual charity game itself, but the mini-game that occurred during the first intermission. An announcement was made that a team of local pee-wee players was going to play, what they didn't tell us was that it was going to be against the NHLers!

- The NHL players didn't let up all the way either, making saucer passes, deking around the kids, and making their lives "miserable". It was quite entertaining watching these kids all trying to chase down these grown men as well occasionally try to lay a hit to no avail.

- Surprise player Mathieu Dandenault was probably the bully of the game against the pee-wee players. At the opening faceoff he tripped the winger he was matched up against with his stick. The kid got up, and gave a light slash to Dandenault's shin pad. For that effort he found a stick getting pulled behind his skate and himself back on the ice again.

- There was one kid in particular who seems destined to become an enforcer. He was chasing Neil throughout the game and even tried to get Zack Smith to fight (Zack almost obliged before heading to the bench).

- For the final minute and a half, the entire pee-wee team emptied off their bench to outnumber and hopefully overwhelm and the 5 NHL players.

- This would lead to another Dandenault altercation in front of his own net where several players went after him. With little effort he pushed them away resulting in kids sliding on the ice all around him. It was like a scene out of a Hulk movie (except on ice).

- Just as the game ended, Neil became the target for the kids as around 80% of them surrounded him attempting to bring him down with little success as he easily slapped all the players to the ground. 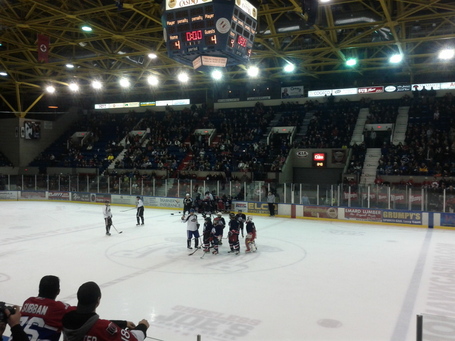 Neil being swarmed in the background

- To end the night, the players were supposed to conclude with a 45 minute autograph session. However, they underestimated the number of fans who wanted to meet them. They generously stayed double that amount of time to get as many people through as they could before their bus had to leave. Even the legend himself was signing! 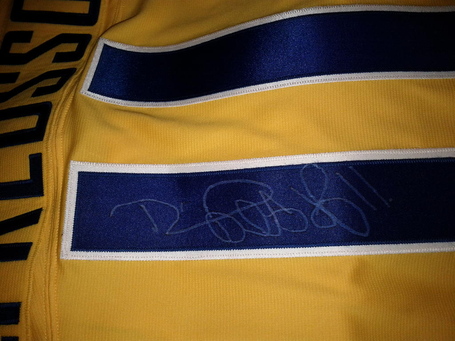 - Overall, it was well worth the trip out. It was a great event raising a ton of money for charity. I expect it to be equally as successful in the future locations where the First Assist Charity Classic will be held.