No comeback this time: Senators 1, Ducks 2

Share All sharing options for: No comeback this time: Senators 1, Ducks 2

Stop me if you've heard this one before: Craig Anderson gave his team a chance to win.

Unfortunately tonight, the punchline was that they didn't.

The Anaheim Ducks were the more opportunistic team in this game, smothering the Senators and stealing the thunder of their style of play of late. Much like the Cup Finals in 2007, the goonish Ducks forwards battered the Senators' defensemen with a heavy forecheck, giving them no time to advance the puck and forcing them into bad plays.

There's not much else to say. The Ducks won the important faceoffs, blocked the important shots, and owned a significant lead in shots on goal until the game was already 2-0 in their favor. Sens fans cam complain about the penalty called on Milan Michalek for closing his hand on the puck (forced by a heavy crosscheck that sent him crashing into his own net) or for a non-call on what seemed like a trip late in the game, but reality is that those are excuses.

Anaheim is 7-2-1 in their last ten games, and the bottom line is that they beat Ottawa at its own game tonight: Hard work and opportunistic scoring. No fluke here; the team that deserved to win walked away with the two points.

Fortunately, things aren't as bad as I'm making them sound here. Ottawa wasn't terrible, as they were against Winnipeg; they were simply beaten. That's going to happen, because no team goes 82-0. You can't beat every team with hard work and opportunistic scoring, because sometimes the other guys are willing to work just as hard as you are. Hopefully the team uses it as a learning experience and starts to shake the slow starts they've been experiencing so frequently these past few weeks.

Sens Zero: Erik Karlsson
Rare bad game for the kid tonight, as he was directly responsible for both of the goals scored against. Corey Perry got the puck in perfect position to beat Anderson because Karlsson inexplicably left his man to help partner Filip Kuba retrieve a puck in the corner. Neither defenseman actually got to touch the puck, as Ducks forward Bobby Ryan fed it to an uncovered Perry sitting just a few feet in front of the net. Why Karlsson chose to gamble on that play I'm not sure, but he lost and it cost the team. The second puck was an own-goal--the result of Karlsson batting the puck twice in mid-air. Of course he wasn't trying to score, but it was just an unlucky night for him.

Sens Hero: Chris Neil
At least one Senator came to play tonight. Neil was the team's best forward, scoring Ottawa's lone goal through a simple willingness to crash the net, and he almost evened things up on his next shift with a great shot to create a rebound that net-crashing Nick Foligno couldn't quite get past Jonas Hiller. Neil had four shots on net and led the team with five hits. He was up for this one.

Sens Killer: Blocked shots
Ottawa actually outshot Anaheim in this game, directing at least 50 shots towards Hiller. The problem was that fully 21 of those were blocked. Francois Beauchemin blocked a ridiculous nine all by himself, and he had four blocks before the game was even four minutes old, helping to successfully kill an early Ottawa power play. It was frustrating to watch the puck ricochet anywhere but towards the net all night. The Senators had very few quality scoring chances as a result.

Sens Hero: Craig Anderson
I feel like this is almost obligatory at this point, but the fact is that this game could have been out of hand if not for a number of outstanding saves by Anderson. There's not a human alive who could have made a save on either Anaheim goal, so there's no real fault to lay at the feet of the goaltender. He'll take the loss on the scoresheet, but he definitely doesn't deserve to.

Petersson watch: Forward Andre Petersson put his acting career on hold to make his NHL debut today. He was extremely noticable on his first shift, generating two takeways in the offensive zone, and he also got a shift on the first line while Michalek got a breather after a penalty kill. He did well enough, but as a rookie, only played 5:03. Still, his competitiveness was quite obvious, and he's a player to watch next year. 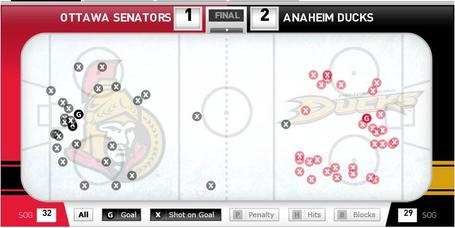 Highlights (if you must):