Silver Nuggets: Nick Foligno should not have received any penalty

Share All sharing options for: Silver Nuggets: Nick Foligno should not have received any penalty

Like most Sens fans, seeing Dion Phaneuf airborne after a Nick Foligno had me very, very happy. Then seeing the Maple Leafs captain go all caveman to fight Foligno and then sitting in the penalty box for Ottawa's equaliser was even sweeter. But should Foligno have received a penalty at all? From the NHL rules (the emphasis is mine):

Let's compare it to the hit by Brad Marchand on Sami Salo, here is a screen capture from Geoff Cheek. 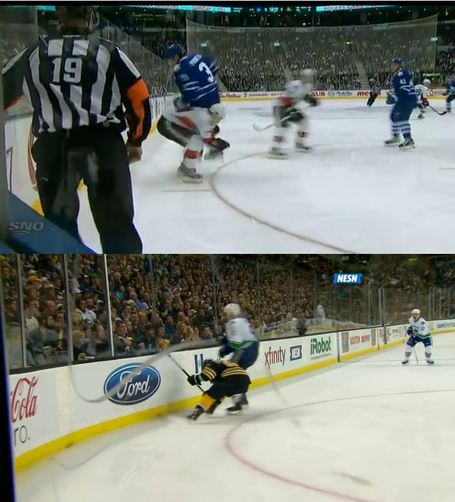 There is Nick Foligno NOT hitting Phaneuf's knees, the contact is around the thighs/waist area, but certainly above the knees. By the NHL's rules, that's not clipping. Brad Marchand you can see however, is going for the knees.