Share All sharing options for: "World expansion... next step for the N.H.L." 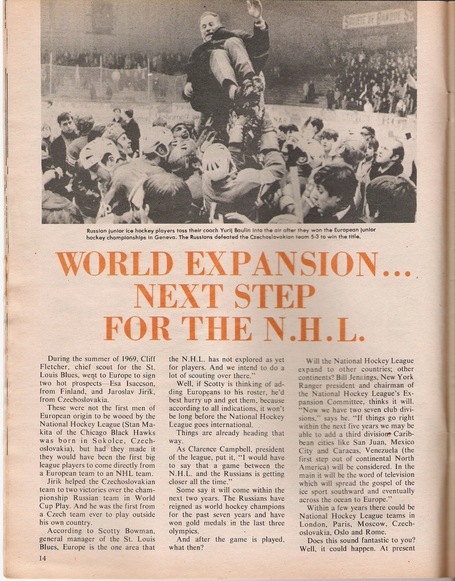 I found the above article looking through the 1970-71 edition of Sports Review's Pro Hockey's, on page 14. After articles on Bobby Orr ("Bargain Basement Super Star") and goaltenders ("You Gotta Be A Nut... To Play Goalie In The N.H.L."), the editors looked forward to an apparently inevitable Stanley Cup playoff series between the "Moscow Reds" and the Boston Bruins, and then the possibility of overseas expansion:

'Will the National Hockey League expand to other countries; other continents? Bill Jennings, New York Ranger president and chairman of the National Hockey League's Expansion Committee, thinks it will. "Now we have two seven club divisions," says he. "If things go right within the next five years we may be able to add a third division. Caribbean cities like San Juan, Mexico City and Caracas, Venezuela (the first step out of continental North America) will be considered. In the main it will be the word of television which will spread the gospel of the ice sport southward and eventually across the ocean to Europe."'

It's funny how long people have been discussing the possibility of world expansion for the NHL, and how little that has progressed in... well... decades.