Editor's note: The following is a FanPost by one of our readers. Anyone can post a FanPost to start a discussion or shed some insight on a topic, and our favourites end up posted on the front page. Thanks to Donny1619 for this great piece!

What's the best way to prevent off-season sickness, a longing for NHL hockey which you breath day in an out? Stalking 16- and 17-year-old kids ready to make this season count, as their hockey lives depend on it. The 2012 NHL Entry Draft has been regarded as rich in skill, but not as much depth as 2011, where our dear beloved Ottawa Senators ripped out the hearts of 29 other teams and sent a postcard message to the NHL, only desribed by the fine words of, "#winning".

All kidding aside, the top prospects are probably going to change from now to June 2012, when Filip Kuba will be re-signed to a 5-year, front-loaded contract with an incentive bonus for five hits every season. Here's what I've been able to pick up from the interwebs on the kids who, for the time being, seem to be the top prospects for next year's draft:

The prospect that is turning heads already, Russian greats such as Vladimir Putin Vladislav Tretiak are calling him the "next Pavel Bure". Scary to think, as the guy that was called the next Pavel Bure was in 2004, a guy by the name of Alex Ovechkin. 49 goals n' 101 points in 65 games last season is scary to think about, and scouts are going to be watching him closely this coming season. That's where I get worried. Remember back to a time in August 2010, when guys were already billing Sean Couturier as the No.1 pick in 2011. He fell the 8th. You can't pick the first overall pick this early, so Nail (no, not nail, Nah-Yill) isn't going to have to work his butt off. The good thing is that he's already said he wants to play in the NHL, and the NHL only. If Ottawa got this guy, he's a perfect line-mate for the Spez Dispenser. Can you just hear Schreiber yelling out "Spezza through center ice, oh nice pass to Yakupov, down the wing, Yakupov SCOREESSS!!! NAIL YAKUPOV, AND THE OTTAWA SENATORS HAVE WON THE STANLEY CUP!!!" Ok, that last part pay have been a bit too much,

Hey, another Sting! Or a Stinger! Whatever they call them, Alex is my favourite prospect so far in the 2012 Draft Class. Compared by Hockey Prospectus as a Joe Thornton-type of player, he was the catalyst to Yakupov's high-flying goal scoring. His 83 points in 68 games is nothing to scoff at, and his overall height and "bulkness" is on track to becoming NHL-type. Igor Larionov compared him to Marian Hossa. His dad is Belarussianwho lived most of his life in the US, so Alex is American and will try-out for the Americanos at the upcoming World Juniors. If Ottawa got him, he'd make one hell of a 1-2 punch with Spezza, however I think that role may be reserved for Mikachu. We shall see, though.

Murray's been on everyone's list since Day One. He got an invite to Team Canada's World Junior Camp last November, and is a sure bet to make the team this time around. Murray's a smooth-skating defenseman who from what I can say from personal experience, is a franchise defenseman. I've been able to watch him play live against the Oil Kings, and I will say he's always involved in the play, whether it's on offense or defense. There are rumblings of a Scott Niedermayer-type, however it's tricky to make those comparisons to one of the best defensemen ever in the NHL. Does Ottawa need another D? Well, the immediate answer would be no, but it never hurts to have too many defensive prospects.

So remember when Sens Nation fell gaga in love with Gabriel Landeskog in this past year's entry draft, only to have Colorado rip him from our hearts? Yeah, don't worry, cause Lando v2.0 is coming to a draft near you. Martin Frk is the quintessential player every team needs to have. Heart, hustle, soul, and skill. His tenacity showed with the Czechs in last year's World Juniors. What's scary is that he is developed body-wise, and has the frame that could start in the NHL right-away. One negative that has been written all over the internet about him is his tendency to take costly penalties, that'sa thing that won't stay with him forever, and isn't a real weakness. His persona is the exact type of player the Sens need in their system, a pugnastic (I swear, Burke didn't make me write this) player who has soft hands and annoys the hell out of other teams. Kinda like Brad Marchand, who was a HUGE factor in the Bruins Cup win. Some compare him to Cam Neely, but once again, too early to tell. Remember when Gary Roberts was a thorn to the side of the Senators in the playoffs? Yeah, Ottawa's still looking for that thorn to agitate the Leafs, Habs, Sabres, etc. FRK!!! 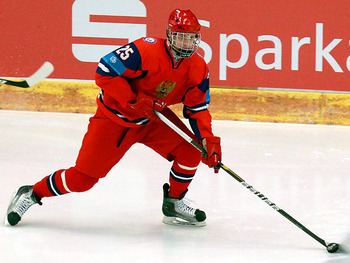 Grigs is quickly climbing up the rankings after a superb performance at the World U-18's last year. Notching 18 points in 7 games alongside Galchenyuk and Yakupov, Grigorenko's type is a endangered species, a young Russian playing the KHL. Still, he's got the tools that make scouts drool. Puck possession, great vision of the ice, and a knack for the net, according to Ryan Kennedy of THN. But then, there's always the Russian Factor. Will he commit to the NHL? Nobody's heard a peep yet, which may seem him fall down the rankings. However, a team is going to take a gamble on him, which may work in spades. Will it be the Senators? He addresses an area of need in the system (Right Wing depth). But the Murrays and Pierre Dorion have been known to steer away from Ruskies. Will it be different this time, considering Grigorenko's skill set? Time will tell. 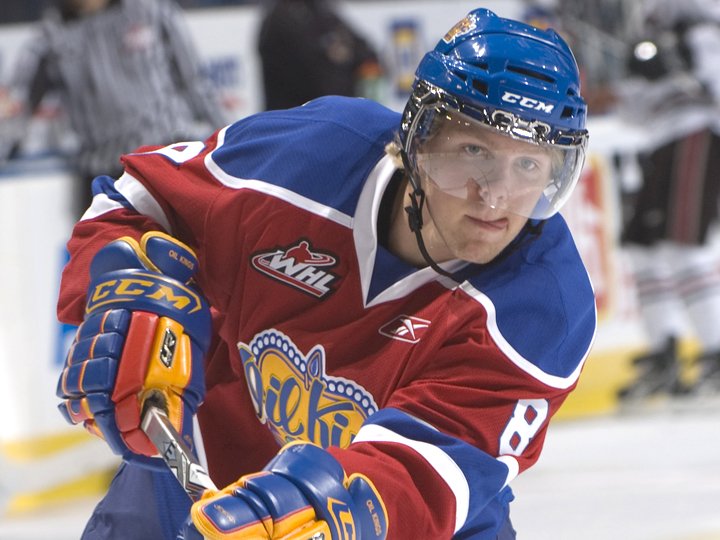 Griffin Reinhart. What a beautiful name. I went to 14 Oil Kings games this past season, and this guy made me drop my jaw every time he was on the ice. He is once hell of a mean SOB, but isn't all that. His 25 points in 45 games this past season showed he has offensive potential, mainly his blast from the point. I can already imagine his nicknames. Griff, Griffindor, Harry Potter, fuck them all I love this guy, and if he got stolen by the Senators it would make me immensely happy. Don Cheery would be happy. I don't care about how many D-Men we got, if he's on the board then you gotta take him, unless, well, Yakupov's still there.

Yo! Where have I heard that last name before! PK's little bro is goalie eligible for the 2012 Draft. Known for his quick reflexes, and instinct saves, Malcolm's getting a lot of press for the Draft, although some guys say he'snot Round 1 material (cough me cough). He had a decent season with a bad team in Belleville, and is going to have to improve on that this season. Ottawa needs goalie depth behind Robin Lehner, just in case the apocalypse happens. If Subban is available in later rounds, why not take him? But there'sstill a chance he shoots up the draft board with a good season. And, oh, there's another Subban coming down the pipeline, defenseman Jordan in 2013. Yay?

So that's all, boys and girls. There's some others out there that I didn't know much about, or are in the shadows at this moment, such as Filip Forsberg and Nick Ebert. Se y'all another time!