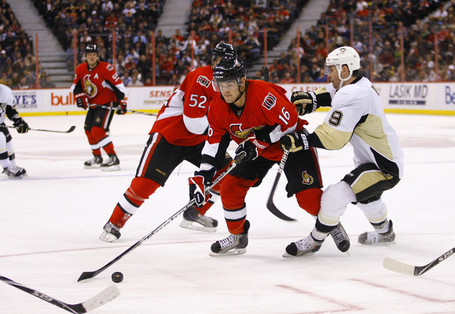 Editor's note: The following is a FanPost by one of our readers. Anyone can post a FanPost to start a discussion or shed some insight on a topic, and our favourites end up posted on the front page. Thanks to OD99 for this great piece!

Welcome to the first edition of Will He Or Won't He! Hoping to spur debate I will begin posting stories centered around the Sens organization that ask a simple question regarding aspects of the team while inserting my view and inviting others to back it up or oppose it (hopefully with a reason). Today is all about BobbyButler...

Will BobbyButler score an astonishing 30 goals this season while riding shotgun beside Jason Spezza and whoever else they put on the line?

Admittedly 30 goals will not be an easy task but I believe both recent and not so recent history indicate Butler has the skill set, winning attitude and pedigree that all gifted snipers must possess. See more after the jump...

NOT SO RECENT HISTORY - HIGH SCHOOL AND JUNIOR

Lots of kids can light it up at the lower levels and as the competition increases the pretenders swiftly get exposed but as BobbyButler has progressed through each level he has taken some time to adjust before his knack for finding the back of the net has shone through. With hockey being organized slightly differently in the USA we can pull data from both his time as a member of the Boston Jr. Bruins and as a player with Marlborough High (everyone receives a carton of smokes each semester and their mascot is Menthol Moose).

Posting a combined 31 goals and 41 assists in 115 games his first two season for the Jr. Bruins BobbyButler really broke out in '05-'06 registering 28 goals and 30 assists in but 61 games. The Bruins also won the EJHL championship in '05 (the one time in 8 seasons that NJ or NH didn't win it).

After making the varsity hockey team while still in 8th grade BobbyButler went nuts his Junior and Senior years of HS scoring an astounding 116 goals (first setting the school record with 58 goals as a junior and then matching it the following season) and 53 assists in 50 games while also leading his team to the Div 3 State title in '05.

This is the first large leap BobbyButler would have made competition wise and as expected he progessed each season.

I can't explain the drop in goals his sophomore season (as in junior there is lots of turn over so perhaps younger linemates?) but his total points went up and then he really lit the lamp his senior season when he was nominated for the Hobey Baker award and finished as the runner up.

It is in BobbyButler's first full season as a pro that the numbers show how dynamic he can and will be. As having a well rounded game is important in the current NHL (and by extension will impact his playing time) this section will take a look at some other aspects of his game such as +/-, power play time and efficiency and his consistency. Taking into account some time to get accustomed to the speed and rigours of AHL and NHL hockey I am not considering his 2 games at the end of '10 season although I was present for his pro debut against the 'Canes and thought he looked good then as well.

Beginning his first full season of pro hockey in Bingo Butler wasted no time by scoring a goal in his first game and having 3 goals and 5 points after his fist first four games. From there he had one of his longer scoring slumps, not posting a point for 3 straight games before ripping off 9 goals and 3 assists during an 8 game point streak. Throughout the rest of his regular season AHL games Butler had goal scoring droughts of 8 and 5 games but other than that he never went longer than 2 games without scoring a goal. It should also be noted that Butler scored 8 of his 22 goals on the PP and that while he was -6 after 10 games, he finished the season a +5..

BobbyButler's NHL career didn't start out nearly as well as he had 0 points in his first 9 games (the 9th game being the first of his 3rd and final call up for the season) and was a shockingly bad -11 after 12 games. Perhaps not having instant success was a good thing in the long run as his finish was something that should make all Sens fans giddy with excitment for what will be. Games 10-12 had him post 3 goals and 2 assists and in total he scored 10 goals and 11 assists over the final 27 games but the most impressive stats? He slowed the bleeding and was only -5 over that same time frame and also didn't prop up his totals with PP chances, bagging only 1 goal and 4 assists with the man advantage all season.

Butler carried that momentum into the Calder Cup play-offs scoring 13 goals and 4 assists over 23 games while contributing points in 16 of those contests (he also spaced his ability to bulge the twine very well scoring 13 goals over 13 different games). He also ate up the opposition on the PP netting 6 of his 13 goals with a little more room to maneuver.

Taking into account his consistency, his shot, willingness to get into the dirty scoring areas and what I believe will be time on the #1 line and #1 power play I expect BobbyButler to score 30 goals and 50+ total points. Few players are blessed with the knack for scoring that Butler has (as evidenced by the fact that only 29 NHL players scored 30 or more goals last season) and I for one am very much looking forward to seeing the varied ways he finds to fill the net.

Will BobbyButler score 30 goals or more this season?