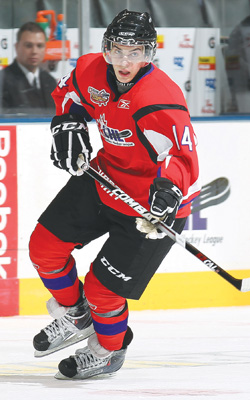 The 61st overall pick got overshadowed a bit by the announcement that the Senators had acquired Nikita Filatov from the Columbus Blue Jackets, but Shane Prince is now the fourth forward acquired in the first two rounds of the NHL Entry Draft, fifth if you include that Filatov trade.

Prince plays for the Ottawa 67s of the OHL, so he's already familiar with the city, and more than a few fans will be familiar with the way he plays. Though he's only 5'10", 174 lbs, it's said he plays bigger than his size. His coach had this to say about him:

"He's got great speed. He distributes the puck to everyone. I think he's utilizing his speed, he's passing the puck, but he's also more confident. That started at camp when he realized he was as good as anybody on the team. He had the chance to prove it, got to the No. 1 line. In junior hockey you're on one line one day and another line the next, but he's stayed there and he's made the difference. With his speed, he was carrying the puck in a lot and making the plays to Martindale and Toffoli and that's why they appreciate him so much. It was a challenge, but there was no doubt he accepted the challenge, I think it was his natural ability that's made the difference in that line"

Prince was second among draft-eligible players in the OHL with 88 points (including 25 goals) in just 59 games.

TSN.ca scout Grant McCagg had this to say about Prince, who was ranked 43rd overall in Bob McKenzie's rankings:

Enjoyed a major breakthrough with 88 points in 59 games after splitting last season between Kitchener and Ottawa. Suffered a concussion near regular season's end that limited him to three playoff games. Strengths - One of the draft's best playmakers, really sees the ice well, improved his work habits and played with a competitive edge. Deceptive skater with good quickness and lateral agility. Skilled stickhandler who likes carrying the puck. Weaknesses - Lack of size a concern for teams picking, needs to keep his head up when carrying the puck. NHL Upside - Has the playmaking abilities and puck skills to compete for second-line NHL duty someday, but will need to bulk up for NHL.

Prince has queston marks because he did play on one of the best lines in the OHL, and one always has to wonder if someone is simply reaping the benefits of great linemates or is helping make their linemates great. Still, his point totals are intriguing, as are his playmaking and competitive qualities.