Earlier this month, we looked at the suggestion that  if the Ottawa Senators were truly committed to a goal of long-term success, they needed to consider trading Jason Spezza--and the case against making that move. . The reaction to the suggestion of moving Ottawa's best player was predictably emotional, and most of the arguments for keeping him centered on the benefits his intangible qualities brought to the team. Given that intangibles are inherently unquantifiable, this made for a dubious argument of opinion.

Perhaps it was because the suggestion was so emotional that the original hypothesis -- the length of time of an average NHL rebuild wasted Spezza's best remaining years on uncompetitive teams --  and supporting facts were sometimes clouded in dissenting opinions. While Adnan was gracious enough base his compelling counter-argument on the same facts as my original hypothesis, I found it surprising that no one else actually asked the same question I asked while compiling data: "What if the Senators are closer returning to the playoffs than the average indicates?"

There are reasons to believe they are, and they begin with the team's goaltender, Craig Anderson.

Anderson, as fans know, started his Senators career with a 47-save shutout masterpiece against Toronto. He went on to post an 11-5-1 record, including another shutout, a .938 save percentage and a 2.05 GAA for the rest of the year. While achieving these numbers over an entire season isn't unreasonable -- Tim Thomas posted very similar ones this year -- I felt that expecting the same level of outstanding play we saw in a short audition to sustain itself was. We can't deny the possibility that Anderson might be that excellent for a whole year, but it's more likely his play will slip a little bit, simply based on the law of averages.

That meant finding a different criteria to evaluate Anderson's impact on the team. Save percentage is generally agreed upon as the best indicator of a goalie's play, but I wasn't interested in how great Anderson was individually; I was looking for a way to determine if he was making a impact for the team. With this in mind, I chose goal differential by period as my method of evaluation. It was chosen for simplicity --literally, is the goalie giving his team a chance to win? If the score is even or Ottawa is ahead, that's a reasonable shot at winning. If Ottawa is behind or the goalie has been pulled, they haven't given their team a good chance to win the game.

As was the case with the Spezza article, the following numbers are not intended to make a definitive statement about Ottawa's goaltender play for the 2010-11 season. For instance, they do not take into account the way goals were scored -- so a 5-on-3 back door, no-chance goal is weighted the same as a softie from the red line. They are also not normalized based on sample size. In addition, empty net goals were not counted against the goalies, but empty net goals for the Senators were counted in their favor, and goals scored before or after a goalie was pulled were not counted against them.Consider these stats as a rough, simplified look at goalie impact.

Because it would be meaningless to only look at Anderson's numbers (what would we be comparing him to?), I compiled the same numbers for all six goalies that saw time in between the pipes for the Senators this year. I then then averaged them to get a general sense of whether a goalie was more or less likely to have his team behind in any given period. I then put the averages side by side for easy comparison. Since the assumption is a goal deficit (pessimistic, huh?) the higher a number is, the worse it is.

So, in the words of the Joker's surgeon, let's see how we did:

So, we see on average, Anderson was the goalie that best gave the Senators a chance to win last year. It's interesting to note that McElhinny was the second-best option, though again, small sample size must be stressed here.
Now that we have an idea of how the goaltenders fared on average, let's look at what that means in terms of percentage. What do these averages tell us about frequency, anyway? It's great that Anderson gave the Senators the best chance to win, but how often did that happen? Obviously we know from his record that it happened more often than not, but I was more interested in a breakdown by period. Here's how all our goalies looked.
First, the old guard: 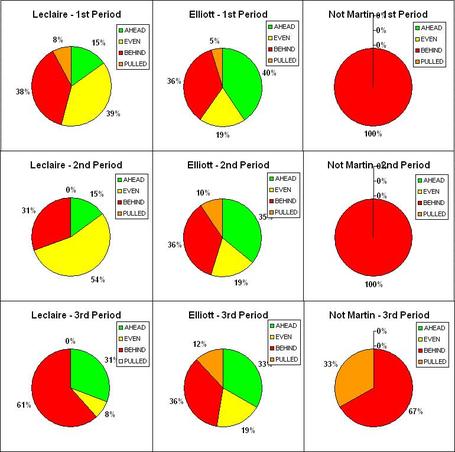 Some observations
Now, the replacements: 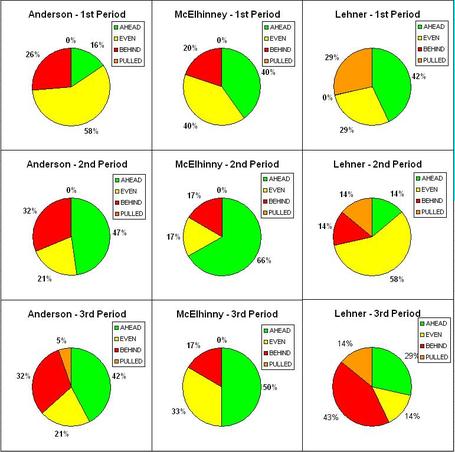 Observations:
I skipped the pretty pictures, what does it all mean?
The bottom line is that Anderson was not just spectacular last season, but that he consistently gave his team a chance to win. Given that opportunity, we saw the same Senators team that was mired in a battle with Edmonton for last place suddenly able to post wins over playoff-bound teams like the Washington Capitals, Philadelphia Flyers, and Montreal Canadiens.

What it does not mean, however, is that all of the team's problems have been solved.
Why?
Most importantly, the numbers tell us that when Anderson was not on his game, he was almost as bad as Elliott. Consider that despite being even or tied 75% of the time after one period, his average goal deficit was positive. In other words, despite being down just 25% of the time, the Senators were down by such a large margin that it outweighed the even and up pieces -- even though they were three times as likely to occur! Translation: When Anderson is bad, he gets shellacked. I'm willing to bet Colorado fans will support this claim.

Given that we expect Anderson's play to slide back towards more average numbers, that fact must give us pause before we declare the Senators to be back in playoff contention next year on Anderson's play alone. If the Senators find themselves down in a game and Anderson isn't spectacular, do they have the talent to come back on their own? If the Senators find themselves in a wild shootout, do they have the skill to keep pace?
The answer to both these questions is unfortunately obvious: No.

Reasons for optimisim
With a plethora of rookies joining the team and dearth of scoring talent next year, it's sadly easy to envision the team in one of those two scenarios frequently next year, and though the results won't be as ugly as they were last season, they won't be pretty, either.
But in 2012-13, the combination of rookies having one more year of experience, this year's top picks possibly being ready to contribute, a strong free agent market, and the shedding of some of last season's dead weight tells a different story.
If Anderson can give a roster that's about to get pretty decent influx of talent the same consistent chance to win, the Senators could very well be returning to the playoffs sooner than most expect.