The case for trading Jason Spezza

Share All sharing options for: The case for trading Jason Spezza

Given the encouraging developments we saw in Jason Spezza this year - namely the improvements in his overall game as well as the massive growth in leadership, the headline above might come across as unthinkable. Why would the Ottawa Senators possibly consider trading their best player when he is finally starting to show fulfillment of the promise that made him the second overall pick in 2001?

The thought is not as crazy as it seems upon first glance. The Senators' current situation and their recent struggles have put them in the awkward position of potentially having their best player wasted. As much as Spezza has earned the respect of most fans with his play this year, the harsh reality is that it does the franchise no good to let him wither on the vine while he waits for them to surround him with enough talent to compete for the Stanley Cup.

As we will see, the historical implications of the logistical challenge of surrounding him with that talent means the team must consider moving him if the goal is to return to the long-term competitiveness the fans have enjoyed over the past 15 years - but first, there's a misconception we have to dispel.

The myth of the untradeable contract

Some claim that Spezza's current contract makes him untradeable. Quite simply, this is just the latest cliché in a long list of Senators clichés (no different from the "Ottawa has no grit" statement we hear so often from people who haven't watch the team play since 2003) propagated by talking heads and mindlessly parroted by sycophants who think that repeating a paid opinion somehow makes them sound smarter than having their own.

Reality is that Senators fans have a recent and relevant contract to compare Spezza's to: Dany Heatley.  On October 3rd, 2007, Heatley signed a six-year, $45M contract extension with Ottawa.  This gave him salary cap number of $7.5M a year.  One month later, on November 3rd, 2007, Jason Spezza signed a seven-year, $49M deal.  This gave him a salary cap number of $7M a year, and he will be 31 years old when it expires - this will matter later on.

As Senators fans are well aware, Dany Heatley asked for, and was granted, a trade prior to the start of the 2009-10 season.  There were at least two suitors, Edmonton and San Jose (and probably more that we aren't aware of) for his contract - a contract with a larger cap hit than Spezza's.

Heatley's is certainly not the only example of an "untradable" contract being moved.  Since the implementation of a salary cap, the NHL has seen trades of:

Can Jason Spezza's contract be easily picked up by any NHL team?  No, of course not.  Does his salary cap number make him untradable in the salary cap era?  Recent history clearly shows no, it does not.

What does Spezza's future hold?

Spezza's birthday, June 13th, 1983, is convenient because it synchronizes almost perfectly with the start of a new NHL season - the NHL draft. Therefore, we can comfortably say that Spezza will be X years old at the start of any season. In fact, we're giving Spezza the benefit of almost half a year in age, since almost four months will have passed between his birthday and the commencement of the regular NHL season, technically making him older than we are giving him credit for in the upcoming statistics.

To predict what kind of production it might be reasonable to expect out of Spezza, I compiled statistics for all NHL centers since the 1992-93 season.  I chose this arbitrary starting point because it was the first year of the modern Senators franchise.  Statistics lovers, beware: the numbers included do not take into account rule changes implemented by the NHL over the span of data, and can only be considered a rough approximation.  They are not intended to make a detailed prediction of Spezza's future production.

Assuming one of the main arguments for keeping Spezza is his status as bona fide number one center, I only compared centers who had matched Spezza's worst points per game production (.70 in 2003-04) for three or more seasons - like the saying goes, "Once is an accident, twice is coincidence, three times is a pattern." I threw out "seasons" fewer than ten games in the first or last year of a player's career as anomalous, but left in all other shortened seasons - after all, Spezza has only played all 82 games once. I also threw out Spezza's stats (i.e. it doesn't make sense to compare him against himself) and Wayne Gretzky's stats - we're looking for realistic comparisons.

Looking at the chart, a few things are immediately noticeable:

It is important to note that when we talk about point production, we are talking about points per game. Spezza only played in 62 games this year, recording 57 points. It's very possible he will score more points next year, but more points do not necessarily indicate an increase in production.

It is fair to assume if Ottawa were to add a first line winger capable of posting similar numbers as Heatley, Spezza's production would increase. Because Ottawa does not have a player of that caliber on their roster or in development (a 30-goal, 30-assist season from Bobby Butler - the best current candidate - would still be 22 points fewer than Heatley's worst season) it is also fair to assume that his production will remain in line with his peer group.

What does that production look like? To achieve a rough approximation, I multiplied the peer group's PPG at each age by 70 games - Spezza's average number of games played per year for his career so far, excluding the 2002-03 season, when he only played 33 NHL games because Jacques Martin only cared about defense, and Spezza didn't skate past his own blue line yet.

At first glance, we again see that a decline is coming, but it is relatively gradual for the next three years. We can reasonably say that Spezza will continue to produce at or close to his current level during that span. After that, his point production will begin to noticeably decline.

Why is this important?

Because the Senators just traded away some of their core and are drafting 6th overall in the beginning steps of Senate Reform. Spezza's value to the team is in his role as a top center. If the team is not competing for the Stanley Cup during his peak years in that role, then his value is being wasted on the team.

With that in mind, the next step was to try to approximate how long Senate Reform might take.

To determine average rebuild time, I looked at the time span from when a team selected in the top five (i.e. lottery picks with the potential to select first overall) to when they made a playoff appearance - I consider a team that makes the playoffs to no longer be in the "rebuilding" phase.  This data begins at 1995 - the first year the current lottery system was implemented, due to allegations that the Senators had intentionally lost games in order to select Alexandre Daigle in 1993. For the purposes of fairness, the first three years of any new franchises were not considered - they cannot be "rebuilding" if they haven't even had a chance to build. 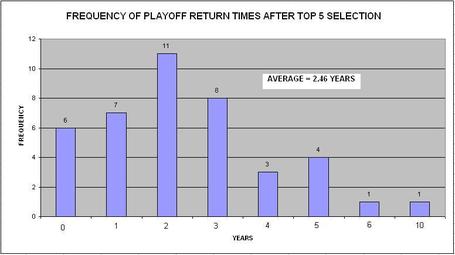 As the chart shows, the frequency tends to favor the short term (which should give hope to Sens fans dreaming of a quick turnaround), but the average time from top five pick to playoff return is 2.46 seasons. Since seasons occur in whole numbers, we're forced to round that number up to three.

Not coincidentally, this is the end of Spezza's window of top center production, as well as the end of his current contract. The implications of this are very clear:

Should they choose to re-sign him after that point, they will be investing in a player four years removed from his peak, and one who will projects to have three years of top six forward production left.

To put it another way, by the time Spezza is 34, he will likely putting up the same numbers that had people saying, "Mike Fisher isn't a true second line center."

The bottom line: If the Senators choose to keep Spezza on the roster, they are giving themselves a scant three-year window to compete for the Stanley Cup before he can only be considered an ancillary piece of the puzzle, rather than a major pillar.

It's painful to think about, but there is evidence worth at least considering that the best interests for the long-term competitive future of the Senators involve trading their top center. There isn't any doubt that Spezza is the kind of player a team should be built around, but the Senators have already built around him and failed to win any Stanley Cups. They will be setting themselves up for failure again if they choose to squander the most productive half of his remaining six-year high output window.

The best chance for Spezza to succeed is to be on a team with young, dynamic players and scoring wingers - one where he can continue to use the leadership skills he's developed this year. It's unfortunate to acknowledge that description does not currently fit Ottawa.

Spezza is a blue-chip trade prospect. He could conceivably bring a return of a 1st plus a high end prospect from a partner, such as 1st overall plus Sam Gagner from Edmonton, 8th overall plus Ryan Johansen from Columbus, 10th overall plus Mikael Granlund from Minnesota, or 20th overall plus 51st overall plus Kyle Turris from Phoenix. All are moves that would position the team for long-term success.

Of course, the team does not have to trade Spezza - he still has a six-year window of high-end productivity left. Should the Senators decide to keep him on the roster, they need only look at his production spike with Heatley to understand why securing an elite winger - such as Alexander Semin or Zach Parise - to play with him becomes the immediate critical need for the team. Failure to do so not only wastes Spezza's value, but also handicaps the team's future by creating a narrow window for success built around him.

There's also the chance that Spezza exceeds the production of his peer group for longer than the six-year window hypothesized here. He certainly wouldn't be the first player to continue to put up great numbers past what we might consider his "prime", but we must remember that is the exception, and not the rule. We must also consider that with two back surgeries performed on him already, Spezza is not an ideal candidate to be one of those exceptions.

And of course, there's the no-trade clause in his contract. Though Spezza expressed some frustration last summer, controls his own fate. He cannot be traded if he does not desire to be, though a fresh start on an emerging team might be more appealing than being the lightning rod on a losing team for the next few years.

When Bryan Murray shook things up with trades earlier this year, he showed a willingness to make hard choices by moving well-liked players to secure the team's future success. He would be doing himself and the organization a gross disservice if he didn't continue that trend and give serious consideration to moving his most valuable player.