Jason Spezza (who else?) leads Senators to 5-2 win over Flyers

Share All sharing options for: Jason Spezza (who else?) leads Senators to 5-2 win over Flyers

It's a good thing this season is almost over, because the story is starting to sound repetitive: The Senators don't quit. Down two to one to the (formerly) Eastern Conference-leading Flyers, with just a minute left in the second period, it was easy to see the game spiraling out of control for Ottawa. Philadelphia, after all, is a team that the Senators just don't have the talent to hang with. And yet, when the intermission came, it was the Flyers who were down, three to two.

How did that happen? Well, part of it is like I said: The Senators don't quit. Part of it is that the Flyers looked as disinterested as a team could be. It's unfair to speculate whether they were just looking forward to getting the playoffs started or whether they just took Ottawa lightly, but whatever the reason, no hockey fan would call what they saw a good effort. The last part was with a little help from some very inconsistent officiating. Ryan Shannon scored a good power play goal past a screened Sergei Bobrovsky, and though thinly veiled Nick Foligno got no assists on the play, he deserved both: It was his work that drew a very questionable holding call, and it was him screening Bobrovsky.

Here's some guy named Jason Spezza, who may have had a big night, providing some thoughts on the game:

"They’re probably the best team in the East and it’s a big challenge for us. I think the game probably means more to us than it does to them and these are important games for us to gain confidence."

Nights like this make it easy to have hope for next season. Hard work and good goaltending will give any team a chance to win every night.

Edit: Sorry, recap fans. Due to unforseen technical difficulties, my entire recap was just erased. Since it's 2:10am and I don't feel like retyping all 1000 words, you're getting the abridged version. There was even Mr. T in there, too. I'll try to recreate greatness in the morning.

Sens Heroes: Jason Spezza, Nick Foligno, Filip Kuba
These guys were all better than their normal selves. Spezza is a leader, Foligno looks like a power forward, Kuba played a very strong all around game.

Z. Smith takes dumb penalties
No PIMs, but somehow Ottawa wound up on the penalty kill because he got elbowed in the head.

Extra Special Sens Zero: Idiot fans who booed Kuba while he was giving away his game-worn jersey
Imagine a rant on the classlessness of this act. It shouldn't be hard. 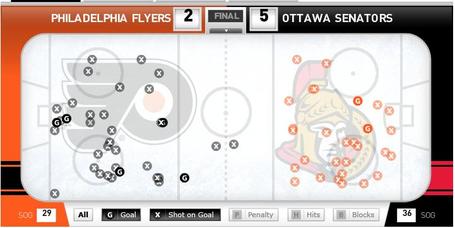