The Binghamton Senators won their fifth straight game last night, which happens to coincide with Robin Lehner's fifth straight start. Lehner's playoff stats are now 5-0 with a 2.65 GAA and stopping 92.6% of shots. Bobby Butler also scored for the fifth consecutive game in a 5-3 Binghamton win. Binghamton was outshot 46-26 but Lehner made 43 saves. Also worth noting is that Lehner did not get one of the three stars in his 51 save performance in Manchester and he once again didn't get one last night. The Baby Sens now lead the series 2-0, and have three consecutive home games to hopefully close out the series.

In the night's only NHL game, the Vancouver Canucks beat the Nashville Predators 1-0. I didn't see the game, but looking at the stats, it seems like Nashville was completely awful, firing only 11 shots in the first two periods. Apparently, Pekka Rinne kept the score much closer than it should have been.

Also, 25 people on Silver Seven Sens (okay 24 people plus Ryan's random generator) made predictions for the second round. The predictions were heavily in favour of Washington, Boston, Vancouver and Detroit. Only one person picked against the majority in three of the four series. That would be our dear Peter who picked Washington, Philadelphia, Nashville and San Jose. Also, no one predicted a Tampa Bay/Philadelphia conference final. Here is a summary in graph form. 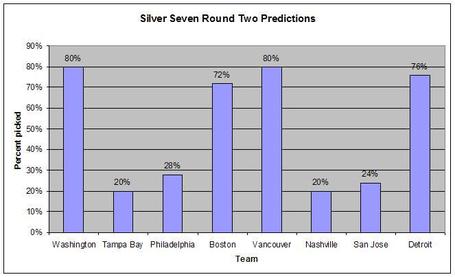 Here are today's links, brought to you as always by mangoes, the official fruit of the Silver Nuggets.

More after the jump.

There are two games tonight in the NHL playoffs:

Here are some others links: