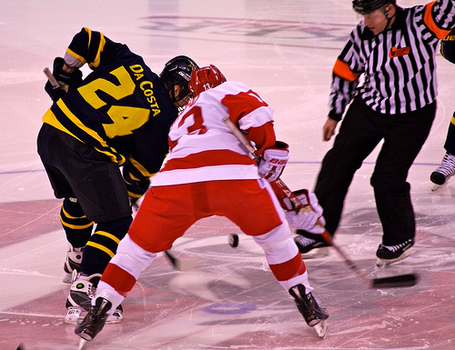 Ottawa landed the cream -- er, crème -- of the college free agent crop with Stephane Da Costa, and you can find more information on that in Peter's post about the signing. For those who want a brief recap, Da Costa is a 21-year-old from Paris, France who has had back-to-back 45-point seasons in NCAA hockey for an extremely impressive 90 points in 67 games. For a good look at how that compares to other recent college players, check out this analysis from Leafs Nation.

Da Costa will play in his first NHL game tonight and will do so as the Ottawa Senators try to put an end to the Toronto Maple Leafs' playoff hopes. Da Costa could quickly endear himself to Ottawa fans by putting up a point or two against the rival Leafs, but that's asking a lot for an undrafted kid who just finished his sophomore year of college. Just think about when Bobby Butler made his debut last season and went pointless in his first two games -- it's a big change. Da Costa's going to be playing against bigger and better players than he's used, he's going to be in a brand new system, and he's bound to be nervous. Also, as a centre, whoever he plays with won't be named Jason Spezza, so he won't be getting much help offensively. (Update: he's centring Erik Condra and Ryan Shannon).

Even though I'm not expecting much, I'm still excited: Da Costa is yet another new player to step in on a team that desperately needs some young faces to shine. There are few things better than seeing someone step onto the ice in a Senators jersey for the first time, and even though it's happened too many times to count this season, it's still exciting.