Share All sharing options for: Senators fail Anderson; lose 5-4 to Thrashers in shootout

It's funny how quickly we develop habits, isn't it? Case in point: The 2010-11 Ottawa Senators. You're watching a game, and then boom, a puck goes in and suddenly they're down two goals, and you're thinking, "Crap, we lost this one." Right? That's where I found myself as I watched the game in person today.

Except this team somewhere along the way learned how not to quit. Twice they rallied from a two-goal deficit, forcing overtime before finally falling in the shooutout. As usual, these rallies were made possible by the outstanding play from their goaltender, Craig Anderson. 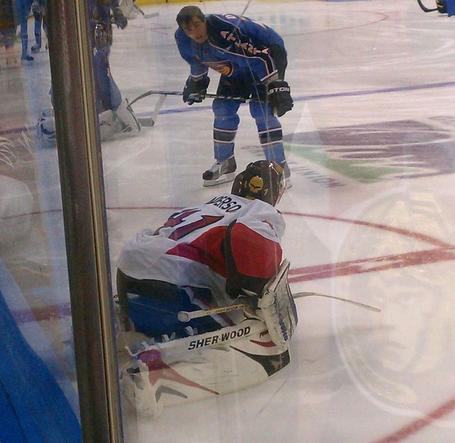 Pictured above is Craig Anderson, talking with Radek Dvorak, presumably over how horrific his mask art is.  Anderson also had a conversation with Dustin Byfuglien in warmups.  How he knows either of these two players is beyond me.

It's just not possible to describe the confidence Anderson clearly gives his teammates. At one point, I didn't consider him for hero status: His choice of rebound control on Atlanta's third goal left a lot to be desired. From what it looked like to me, he either didn't see Ben Maxwell coming down the other wing, or he misjudged how fast he could get to the puck. Either way, Anderson wasn't fast enough to get over and cover the net before Maxwell could fire the puck home. Considering Maxwell's goal came just nineteen seconds after Bryan Little scored, it felt like the collapse was on. Yet Anderson continued to battle. When Mark Stuart's shot managed to trickle through Anderson, re-establishing the two-goal cushion, Anderson continued to battle.

Is the difference between deflating and not quitting for this team simply having a goalie who doesn't slump his shoulders after a crappy goal?  I don't know, but that's how it looks from the stands. 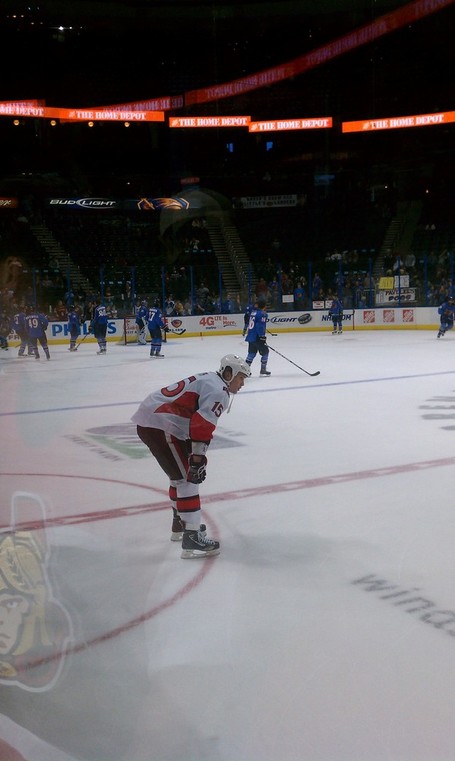 Pictured above is Z. Smith, not giving a crap if I take his picture.

For the third game in a row, Z. Smith chose to change someone's life with his fists, but this time I had a hard time understanding his decision to fight. While Chris Thorburn's major crime in life appears to be his hair style (seriously, click the player link), that's not really a reason to drop the gloves. The circumstances leading up to the fight were essentially non-existent from what I could see. There was a whistle, Chris Neil jostled with someone, and then all of a sudden, Z. Smith is throwing punches. Huh? Either he was trying to defend Neil's honor -- which Neil can definitely do himself -- or he's trying to show management that he'll add some grit to next year's team. Either way, there was nothing to prove in the fight. At least we got a really entertaining scrap out of it, as Z. Smith obviously didn't give a crap that he was giving up height and weight in the bout.

Other than that, I really thought he had a strong game tonight, except in the faceoff circle, where he was dominated.

Stats Matter
Speaking of faceoffs, as a team, the Senators won just 28 of 62 of them. That's a little over 45%, which is about the same likelihood that I don't have a Marek Svatos joke coming up. I constantly found myself wondering why the team never had puck possession, and looking at these numbers explains it. By player:

Kommand Kloustonom
So, the line sent out to take the last faceoff of the second period?

Of course, Spezza was kicked out of the circle (this happened pretty frequently, for reasons that looked to me like nothing more than "Oh, you're Jason Spezza?  Get out."  Not that he was doing anything in there, anyway, so I guess it doesn't really matter) and Winch took the faceoff. He lost. This was an offensive zone faceoff, so I'm really not sure what head coach Cory Clouston was thinking in terms of putting those guys together. He obviously had a plan; I just can't figure out what it could have been.

Sens Hero: Marek Svatos
I tried to take a picture of Svatos in warmups, but he was invisible.

I still don't know how Svatos scored his first goal. I didn't see it go in, because I was watching the crease. That's where I was sure the puck was going to go. Somehow it wound up in the back of the net, instead. It was the quietest goal I've ever seen scored. Thrashers fans sat on their hands, the staff didn't really play any music or videos, and I was too stunned to cheer for a second. Mostly they took the puck out of the net, and had a faceoff.

Not to diminish Svatos' contributions tonight, because he made the most of his chances. He played well enough that I was sure he would be one of the team's three shooters in the skills competition, and I thought he justified the selection with a good shot choice -- it just didn't go in. I believe Svatos scored his 100th NHL goal tonight, and he worked for his chances. Can't really ask more from a fourth-liner than that. Yes, now that Michalek is back, Svatos is playing with Winchester and, ugh, Lessard.

Speaking of Lessard
He had six shifts totaling four minutes.

He also skates like a port-a-potty on a surfboard.

Here's how it went down: Kuba has the puck. He's looking for something to do with it. Since it's stationary, he can't bobble it, so his confusion is understandable. Fed up after about a second of this, I screamed, "OH MY GOD KUBA SHOOT!" (Sorry, but I think God wanted Kuba to shoot also) and Kuba shot the puck. It didn't go in, but wound back up on his stick. Feeling emboldened, I immediately screamed, "SHOOT IT AGAIN!" which he proceeded to do. I had no idea Svatos tipped it until the goal was announced.  Everyone around me was convinced Kuba shot because he could hear me. Booyah.

Sens Zero: Jason Spezza
OK, he had a sweet play to set up Erik Condra for a goal, but other than that, it was really a forgettable night for Giggles. Much like the rest of the team, it just didn't look like his effort level was high on this one. No one on the team quit tonight, which is why they were able to salvage a point, but it didn't look like anyone was giving 100% either. It was a weird game to watch. Spezza was just the most noticeable.

Dear Officials
When players put their sticks on other players, that's usually a penalty. If you need help understanding it, here's a link.

Needless to say, I was not a fan of the officiating in this game. But eventually, the refs just swallowed their whistles, so it kind of worked out. Special dishonorable mention to the hooking call against Patrick Weircioch at 5:08 of the third. Considering the hooks not called, I was flabbergasted when the arm went up.

More Pictures?
Sure, why not? 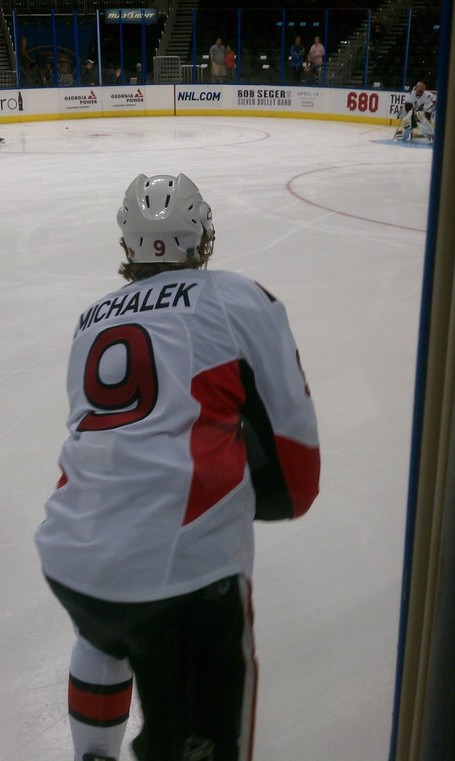 I think it's fairly obvious who this is. Not pictured is Nick Foligno, who Michalek had just got done talking to. This was immediately after I had yelled, "YOU'RE AWESOME!" or "I LOVE YOU!" or some other star-struck babble. Anyway, I'm pretty sure he heard me, as he immediately said something to Foligno. Presumably, it was about me. Also, in the warmups, Z. Smith checked out poster Jonana, who was standing next to me. It was pretty awesome. No players looked me in the eye, which was bullcrap.

Final Word
Kuba was our best defenseman tonight.  Yeah, I said it. 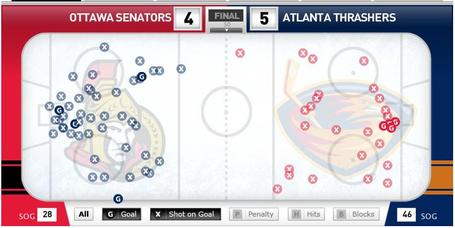