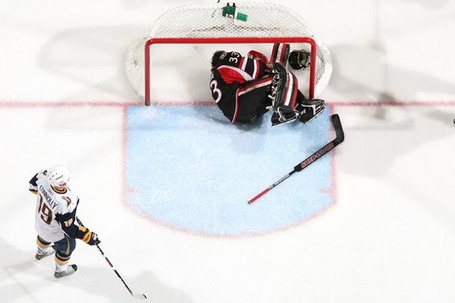 A satirical spin on the Sens goaltending situation
*Please note: This article was written in jest, making light of Leclaire's ridiculous injury problems

OTTAWA -- So finally, after an injury-plagued existence in the Nation's Capital, GM Bryan Murray has acknowledged that goalie Pascal Leclaire will not be returning to the Senators. Unfortunately, in the midst of making his exit, Leclaire has been injured yet again.

Sens executives were clearly despondent upon hearing the news, given the fact that a number of them were heard uttering "don't let the door hit your ass on the way out" shortly before the incident occurred. The club's jinx to find a suitable netminder continues and now they are facing legal action from Leclaire for allegedly 'not providing a safe work environment'.

The Repentigny, Quebec native is seeking punitive damages in excess of $5 million dollars for 'pain and suffering' caused by this latest mishap.

This isn't the first time Pascal has presented a contentious legal matter to the Canadian club. In November 2009, he attempted to sue the organization, along with the puck that hit him in the face while he was, as he puts it "sitting on le bench" during practice.

Another puckstopper, another colossal disappointment. And so it goes for Ottawa--considered by many to be the 'goaltending graveyard of the modern world'. This particular death between the pipes being the most excruciating of all.

There's no telling what the future holds for Leclaire at the moment, but rumors indicate a reprised role as the 4th member of Alvin and the Chipmunks could very well be in the cards.

Leclaire in Ottawa, By the Numbers

Following the failed Pascal Leclaire experiment, will Craig Anderson be the Sens savior in net?