Share All sharing options for: McElhinney leads Senators to 3-1 win over Devils

Stop me if you've heard this hockey formula before:  A team plays a tightly-checked game, and counts on their goaltender to keep them in the game until they can create a scoring chance or get a lucky bounce.  That was the story of this game, except it was Ottawa, and not New Jersey, executing the formula to perfection.  The Devils dominated play for long stretches of the game (including outshooting the Senators 11-3 in the second period) but were repeatedly stymied by Senators backup goalie and thinly veiled Sens Hero Curtis McElhinney.

In the end, that was enough to carry the day as dirty goals from Ryan Shannon and Chris Neil led the Senators to victory. It would have been nice to have a goaltender steal us games back when a lottery pick wasn't on the horizon, wouldn't it?

Sens Heroes: McElhinney, Shannon and Neil
They may sound like a crappy law firm, but they accounted for almost all of Ottawa's damage tonight.  As mentioned above, McElhinney made multiple big saves in the game and provided the same level of goaltending Sens fans have come to expect from Craig Anderson.  McElhinney has won both of his starts, only allowing one goal in each game.

Ryan Shannon opened the scoring by deflecting a Jason Spezza power play laser with his thigh.  I bet that didn't feel good.  Shannon doesn't get hero status for scoring a goal, though -- he gets it for continuinig his high level of play on the second line.  Once again, Shannon created numerous scoring chances for himself and his linemates in the game.  It's hard to imagine him playing at a higher level than he has been for the past few games.

Chris Neil, on the other hand, does get hero status for his two-goal night.  Neil bagged the game winner via deflection and added an empty net goal to seal the deal.  So much for Cory Clouston not knowing who had scored the goals, I guess.  Neil also had a ridiculous six hits in the game, a number I personally think is low.  This kind of game is why Neil is more valuable to the team than a goon like Francis Lessard -- who, in fairness, had what I felt was his best game in a Sens jersey tonight.

(read on for more heroes and zeroes...)

Sens Hero: Erik Karlsson
Karlsson played a whopping 26:14 tonight, easily the most of any skater.  He picked up the primary assist on Neil's deflection, and finished the night as a plus-2.  He even blocked a shot... on purpose.  So, in short, he had a pretty good game.  What elevated him to hero status in my eyes was the confidence and effort level he displayed. Karlsson repeatedly led rushes up the ice, flung the puck around with accuracy, and even played the kind of defense that knocked opponents off the puck.  It's very clear that confidence is a big part of his game, and when he's got it, he can be a real asset to the team.

Sens Hero: Jason Spezza
A two-assist game for Ottawa's top center was a nice way to bounce back from a weaker effort against Pittsburgh.  Though Spezza won just 9 of his 17 faceoffs, he also displayed some pretty nice backchecking.  It's interesting that I felt his defensive game was the standout of his play when he was one of two multi-point players for the Senators, but defense was the name of the game tonight.  Sealing the deal on his hero status was a mature play to ice the game.  Facing an empty net from the red line, rather than trying to deke the Devils players converging on him or take a long range shot, he calmly dished it cross-rink to a wide open Chris Neil.  It was a simple, unselfish play, and, yes, I'm going to say it: It was the kind of play Daniel Alfredsson would have made.

Honorable Mention: Colin Greening
A couple of good plays and an assist for Soylent tonight, most notably pinning Ilya Kovalchuk against the boards on a penalty kill to spring Erik Karlsson and Jesse Winchester on a shorthanded 2-on-1. (Karlsson elected to shoot, of course.) Greening also used his speed to fight for pucks and I thought he showed some impressive strength in creating several offensive zone turnovers.   I don't believe it was a coincidence that he was out on the ice with Spezza for the empty net goal.  Bobby Butler was not.

Sens Zero: Marek Svatos
For most of the game, I didn't think there were going to be any players listed here.  Brian Lee jokes are long gone, and even Francis Lessard made some good contributions in his limited ice time -- although he somehow managed to avoid a roughing call even though he dropped the gloves.  That was before Svats Machine missed his second glorious scoring chance.

So there Svatos is, one-on-one with Martin Broduer, and he waits him out.  Broduer is finally forced to dive, leaving Svatos with nothing but net to shoot at.  He just has to lift it over the falling goalie and instead launched it over the net entirely.  One gaffe is not really enough to get zero status, but as was stated before, it was his second blown chance of the night.  For a guy who "loves to score," he's sure not doing a lot of it.

On Roman Wick
The Candle got a little less than nine minutes of game time tonight, but didn't have much to show for it.  Part of that is due to the kind of game it was, and part of that was due to being on the fourth line.  Wick did get one shift with Spezza and Bobby Butler and fired a shot that was redirected off a post.  He deserves a shot with some better linemates.

David Hale Watch
Four blocked shots, including laying out to take away a great scoring chance.  Other than that he wasn't particularly noticeable, which is par for the course with Hale.  No major mistakes in the defensive zone, no major contributions in the offensive zone.  He's as steady as they come.  If Carkner really is out for the year, it's Hale who deserves his spot.  He showed it again tonight.  He also makes Denis Potvin spazz like a broken record, though that's a harder stat to track.

(Z. Smith also had an assist, was a plus-1, and won seven of his 12 faceoffs.  He's filling out the third line center role nicely... this penalties thing is just a learning process.  Hopefully.) 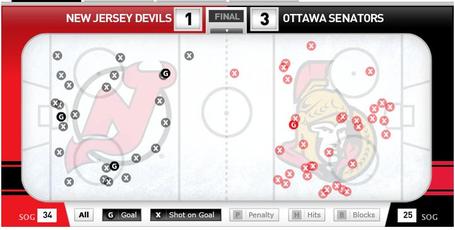