BSens Hero: Barry Brust
He didn't get the shutout, but he made 37 saves and won his eighth game in a row, a new Binghamton Senators record. He also was credited with an assist on O'Brien's first goal.

BSens Hero: Kaspars Daugavins
The Dogman record three assists and had zero shots on goal. Zip! And yes, all three assists were on Jim O'Brien's goals.

BSens Hero: Jim O'Brien
First career hat trick, and he did off eight shots on goal. Looks like he was energized by the call-up, and is looking to get another one.

Things Looking Up?
Patrick Wiercioch had his first pro multi-point game (two assists, calm down), and went +1 on the ice for the tenth time this season.

BSens Hero: Barry Brust
Stopped 42 shots off 45 against. This T-shirt graphic says it all, doesn't it? 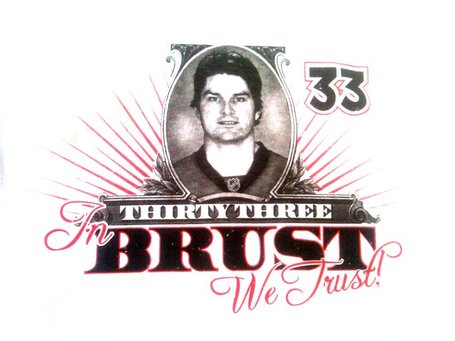 BSens Hero: Mike Hoffman
Scored the GWG with a second left in overtime (and on the powerplay) for his seventh goal of the season.

BSens Hero: Patrick Wiercioch
Had another two-point night, this time scored a goal, his fourth, and an assist.

With the win and the Norfolk Admirals' shootout loss to the Wilkes-Barre/Scranton Penguins, the B-Sens are tied for fourth place in the East Division with 66 points.

†No longer with team

Game 47: Elmira 5, Trenton  2 (Feb. 18, 2011, First Arena)
Elmira scored four goals in the first two periods, and was able to stop a Trenton comeback in the third with a goal from Michael Dubuc to make it a 5-2 contest.

Game 48: Trenton 3, Elmira 2 (Feb. 19, 2011, Sun National Bank Center)
The Trenton Devils scored three consecutive powerplay goals (over the span of all three periods) and were able to hold to the win, limiting Elmira to only six shots in the third.

†No longer with team

David Rundblad ranks second among Chiefs’ defencemen in scoring, sixth in overall team scoring and second in team plus-minus. Marcus Sorensen is listed on the Djurgårdens roster, but hasn't played since January 6th, due to injury. Jakob Silfverberg tied for fourth in team scoring, ranks in goals. Andre Petersson hasn't played since January due to injury.