Senators collapse, then come back, then lose 5-4 in shootout to Devils

Share All sharing options for: Senators collapse, then come back, then lose 5-4 in shootout to Devils

I've never had much use for roller coasters, but now I hate them after the one witnessed on Thursday night.

After the Ottawa Senators feasted on Martin Brodeur to take a quick 2-0 lead over the New Jersey Devils on Thursday night, and extended it to 3-0 after Johan Hedberg took over, they weren't able to hold on to their lead against the Devils' deadly penalty killing unit.

Zach Parise and Dainius Zubrus scored consecutive short-handed goals, and Mattias Tedenby and Ilya Kovalchuk followed those up to put the Devils ahead 4-3 before the mid-point of the third frame. Jesse Winchester scored with seconds left in the game to tie things up, but Alex Auld's brutal shootout performance meant the Devils took home the win.

Sens Zero: The powerplay
Ottawa was technically 0-for-5 on the powerplay, but it wasn't just a moot point: It was a liability. Ottawa's impotent powerplay--featuring terrible passing, non-existent defensive coverage, and giveaways galore--sucked all momentum away from the Sens, and allowed the Devils to fight their way back into the game with two short-handed goals.

Sens Killer: Zach Parise
Parise was the lynchpin of the Devils' offence, scoring Jersey's first goal to get them back in the game, and assisting on the fourth Devils goal, too. He finished the night with ten shots in over 25 minutes of ice time. And had a goal in the shootout.

Sens Hero: Jared Cowen
JARED COWEN PLAYED 31:42 THIS GAME. That is ridiculous. He is a 20-year-old defenceman... I didn't think that sort of thing was supposed to be possible. But even more impressive, Cowen didn't even appear to slow down noticeably as the game went on. He finished with a couple shots on net, too, and an assist.

Sens Hero: Daniel Alfredsson
The man. The myth. The moustache. Alfie was (mostly) very good against the Devils; he had some problems while on the powerplay, and finished the game -1 overall. But he also fired an outstanding one-timer goal (I think Johan Hedberg is still looking for the puck on that one). And when the Sens were down late in the third, it was obviously Alfie who was pushing the team and, eventually, setting up the play on which Winchester tied the game.

The Streak Continues: Nick Foligno
On the plus side, Foligno's scoring streak extended to six games with his goal this evening. He's always been a streaky player, but this is as productive as I remember Foligno ever being. He has nine point (4G, 5A) in the last eight games.

Sens Zero: Alex Auld
The coaches must have given Auld too much notice about the start, because he did not look good against the Devils. He allowed four goals on 31 shots, and then capped that off with a 0.00 save percentage in the shootout (the only Devil who didn't score was Ilya Kovalchuk, who missed the net).

Sens Hero: Martin Brodeur
Ottawa's lead came thanks in large part to Brodeur's terrible play in the first period. He allowed two (weak) goals on just nine shots, and gave the Sens all the momentum--at least for the first half of the game.

Silver lining:
It was almost all worth it, just for this (via JoNana, after Jesse Winchester tied things up): 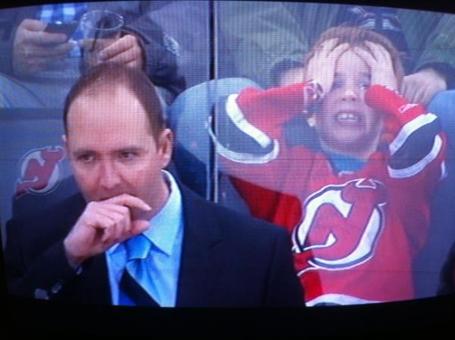