Last night's game between the Florida Panthers and Ottawa Senators was a very exciting one, with two dynamic (and surprisingly potent) teams trading chances until the Senators came away with a 4-3 win in overtime.

The game wasn't without controversy, though. As Mark summarized nicely in the recap, a huge collision between Nick Foligno and Keaton Ellerby left Ellerby visibly shaken, and the Panthers defenceman had to leave the game. Initially there was no call being made, but after convening with one another, the referees and linesmen decided to hand Foligno a five minute major and a game misconduct. Although the Sens were fairly effective in killing off the penalty (they actually had more short-handed shots in the five minutes than Florida had powerplay shots), the Panthers managed to score one goal to tie the game, and gained a lot of momentum from the man advantage. Unfortunately, based on the replay, I'm convinced not only that there shouldn't have been a major on the play, but there shouldn't have been a penalty at all.

As the video shows, it's a big collision. Foligno was assessed a penalty based on the fact that it was a big collision, and the fact that a player was injured. But it didn't warrant any penalty, let alone a five-minute major and a game misconduct. After the jump, I'll break down the hit and review the evidence in detail (and there are also a plethora of Senators links). 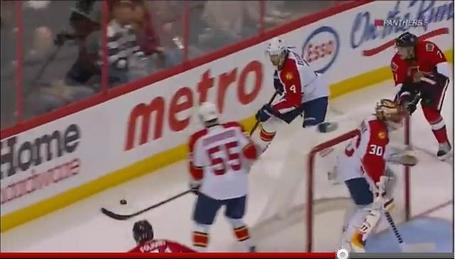 In this first scene, we can see Ed Jovanovski serving no purpose. He is standing still doing nothing, failing to protect his defence partner, and even blocking his defence partner's vision so Keaton Ellerby can't even see Foligno heading towards him. Ellerby's attention is focused mostly on the puck, and on fighting off Kyle Turris. You will notice Scott Clemmensen also failing to warn Ellerby about an oncoming forward, but the fault is mostly with Jovanovski. 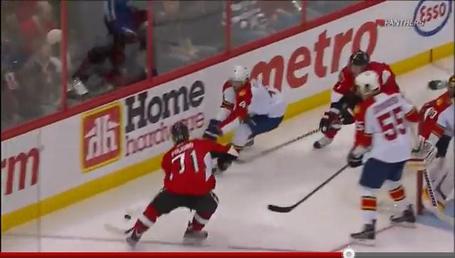 Here we see two important things: First, Foligno is focused solely on the puck, and is not prepared at all for physical contact with Ellerby--although he is raising his head, and sees Ellerby coming. Ellerby is also focused on the puck, reaching for it and putting himself in a vulnerable position. 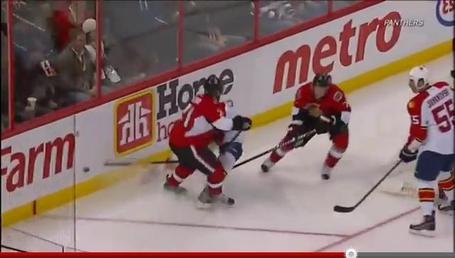 It it not until now that Foligno braces for contact, and--as is plainly clear--when initial contact is made, Foligno's feet are firmly planted on the ice. In fact, his feet are sideways, because Foligno actually tried to slow down in order to lessen the impact of the collision. Because Ellerby had been put himself in a vulnerable position by reaching for the puck, you can see that the contact is more dangerous than it should have been. 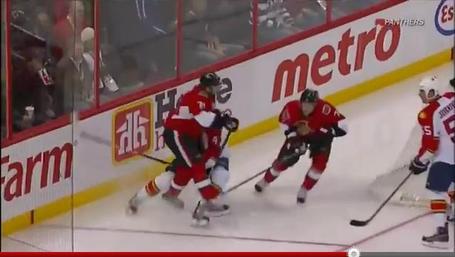 Finally, the scene for which Foligno's penalties were assessed: One player with his feet off the ice and his forearm to the head of the other. But this shot isn't indicative of the development of the play; in fact, this contact could just as easily have happened between two teammates. Physics explains why Foligno's feet left the ice: He was trying to let up on the contact instead of driving through Ellerby, so his inertia drives him up and mostly overtop of the Panthers defenceman--whose body forms a bit of a ramp, adding to Foligno's ascension.

I sincerely hope that Ellerby's injury isn't serious, and it's unfortunate that the collision happened. But it shouldn't have been penalized (in fact, initially, it wasn't going to be), and certainly not to the extent which it was. But this demonstrates a serious problem with the way referees call penalties: The referee (Tim Peel) is on the half-wall, right out of camera, shot watching this entire play develop; he sees the collision, but doesn't blow the play dead until it's obvious that Ellerby is injured (and Jovanovski, who should be more angry at his own carelessness on this play than Foligno's, shoves Foligno's head into the glass with a forearm shiver). But then, because a player was injured, the call on the play went from no penalty to five and a game.