Why I'd like to revoke your All-Star Game voting privileges

I'm not sure why the All-Star Game voting system exists, but I imagine it's simply to give people the illusion that they have some sort of effect on the game. Otherwise, what's the point? It's not too hard to determine who the very best players (or the biggest stars) are in the NHL at a given time, and it's not as though fans are a better judge than the NHL itself.

Then again, the NHL's fan voting system isn't about voting in the best players, it's about voting in fans' favourite players, and this is what makes the whole process meaningless. Rather than being about the merits of a particular player in receiving the honour of being considered one of the best athletes in his sport, the NHL encourages a popularity contest in which the voters have outrageous biases that are pretty much immutable. It's sort of like voting on your high school's student president. 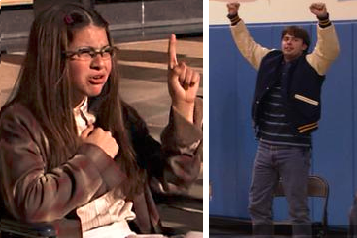 She had a 98% GPA and volunteered. He once beer bonged a mixture of
coffee, whiskey, and cough syrup. You voted for him.

People aren't voting on skill, or even stats. They're simply voting based on what roster that person happens to find himself on at a given time. What's that? You're on Phoenix? Ha! NOT IN MY ALL STAR GAME!

As an example, here is my co-writer Adnan's voting card, one he encouraged you all to follow:

Four years ago, would he have picked Milan Michalek or Sergei Gonchar? Of course not. They weren't Senators.

Where's the fun in this? If all you're doing is using the "Filter by Team" function (yes, it exists on the voting page to encourage this behaviour), you're missing the point. If you were allowed to vote in 23 players to the All-Star game, would you be voting your team's entire roster?

The All-Star Game may be a bit of a joke already, but we simply add to the punchline when we vote players in not based on merit, but based solely on their team. The All-Star Game is supposed to highlight the best hockey players in the world, not just the best players from your favourite team. You can still be a Senators fan if you're voting Phil Kessel and Claude Giroux into the All-Star Game -- trust me, I've done it.

Yet, instead of trying to be unbiased and determining who have been the best players in the early season, I'm sure most fans will continue to simply vote only for the best players from their favourite team. So if you're a Toronto Maple Leafs fan, you'll probably vote like this:

And if you're a Columbus Blue Jackets fan voting on your team's best-performing players, you might just vote like this: