Senators get third straight win with 5-2 victory over Oilers

Share All sharing options for: Senators get third straight win with 5-2 victory over Oilers

The Senators earned their third straight win tonight over the Oilers, but I use the term "earned" loosely. The Senators only had 16 shots on goal, but made the most of their chances by burying 5 of those shots.

Things looked grim to start the game, as the Oilers came out with far more energy than the Sens. The Kid Line of Jordan Eberle, Taylor Hall, and Ryan Nugent-Hopkins was all over the Senators for the first few shifts, and Ottawa only managed to stay in the game thanks to several stunning saves from Craig Anderson.

The Oilers made it a 3-1 game early in the second period, when Anton Lander scored short-handed for his first NHL goal. However, the Senators would expand their lead back to three when Jesse Winchester sniped one home on a breakaway to make the game 4-1.

The Senators received an unexpected goal from Zenon Konopka in the third period to give the Sens a 5-1 advantage, and the Sens held on to win 5-2.

Sens Hero: Oilers Goaltenders
Nikolai Khabibulin made 4 saves on 7 shots, good for a .571 save percentage before getting pulled after the first period. He was relieved by Devan Dubnyk, who allowed 2 goals on 9 shots.

Sens Hero: Craig Anderson
Normally, a .917 save percentage isn't worthy of a hero nomination, but Anderson gets it here because if he hadn't started the game with a series of spectacular saves, I'm almost certain that the Senators would have lost this game. He made the saves he had to, which allowed the Senators to get some lucky bounces and get the win. You also can't fault him on the two goals against -- one was a perfect shot from Lander, while the other was a screened shot where Ryan Smyth was pushing Anderson back into his net.

Sens Hero: Jason Spezza, Milan Michalek, and Colin Greening
The Greening-Spezza-Michalek line hit a bit of a dry spell lately, but they were back at it tonight, scoring two of the Senators' goals. Michalek had a goal and an assist, Spezza had two assists, and Greening had four hits and the game's first goal. Spezza was particularly impressive, as he led the team in shots and created countless chances with some slick stickwork tonight. 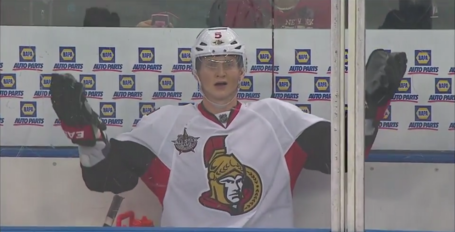