Share All sharing options for: Silver Nuggets: Paul MacLean's use of defencemen

Earlier this morning, Derek Zona over at the excellent Copper and Blue, looked at the defensive deployments by Tom Renney. Derek was kind enough to send me the Senators version of this (he really is awesome by the way). 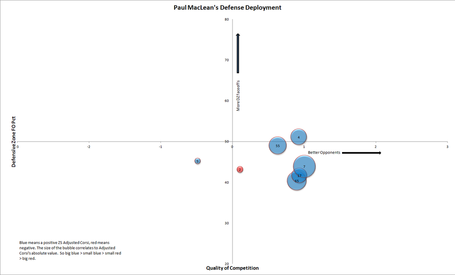 Click on the chart or here to find the full-sized picture.

Jared Cowen is the only player that comes out on the negative side. This is despite Cowen playing a far-easier competition than most of the players. This would suggest to me that Cowen is playing a lot of time in his own zone and struggling to get the puck out. David Rundblad on the other hand, has the highest Corsi rating, despite playing against the toughest competition out of any Senators defenceman (albeit only slightly). While Rundblad has more than held his own by this measure, I get the sense that Rundblad is being misused at this point in his career. As expected, Chris Phillips has the highest percentage of defensive-zone starts. Brian Lee faces the easiest competition.