The NHL All-Star game voting opened and there are five Senators on the ballot. As Ottawa is hosting the game, it would be nice to get all five of them into the game.

Erik Karlsson: He was a lock to make this game before the season even started and he hasn't disappointed. Karlsson has 1 goal and 15 assists for a total of 16 points. The 15 assists and 16 points are tied for the lead among all defencemen while the 15 assists are also tied for second among all players, just one behind Daniel Sedin. Karlsson also leads the Senators with 62 shots which ranks him fifth among all players NHL players in that category.
Sergei Gonchar: Gonchar has 2 goals and 9 assists for 11 points. The 11 points are 14th among defencemen. He's had a solid year so far, though perhaps not all-star worthy.
Milan Michalek: Michalek has 11 goals and 5 assists for 16 points. The 11 goals are tied for second in the NHL. He's been Ottawa's best forward and has definitely come into his own this season. He's even scoring without shooting the puck, though his 56 shots are second on the club behind Karlsson.
Jason Spezza: Spezza has 6 goals and 11 assists for 17 points. The 17 points lead the Senators and is tied for 14th in the NHL. Though he's slowed down lately, he's been a big part of most of the Senators wins. His 56.0% face-off percentage is good for 15th in the NHL and the 398 face-offs he has taken is 36 more than anyone else in the league.
Daniel Alfredsson: Alfredsson is not having an all-star season with 3 goals and 4 assists for 7 points in 12 games. But if Senators fans have a soul, seeing as Ottawa is hosting the game in what could possibly be the captain's last season, Alfredsson will be voted in. There is already a website dedicated to voting him into the game, www.votealfie.com

The Senators don't have a goaltender on the ballot, but I have decided to vote for Robin Lehner as a write-in candidate for fun.

While some of you may want to vote for other Senators players not on the ballot as write-in candidates, I would kindly ask to vote for all five Senators on the ballots to avoid vote splitting and to maximise the number of players we have at our home all-star game. You can vote 30 times at vote.nhl.com plus another 30 times by visiting the same site from your mobile phone and another 30 times via SMS messages. All 30 of my votes went to these 6 players. According to official rules, creating multiple email addresses will disqualify the entry.

And lastly, as I am not above promoting myself, here is me and my friend Łukasz on Hockey Night in Canada. If you really like me, you can view the video here and go to the 50:00 mark. ;) I am the guy in the Spezza jersey and red Sens hat. 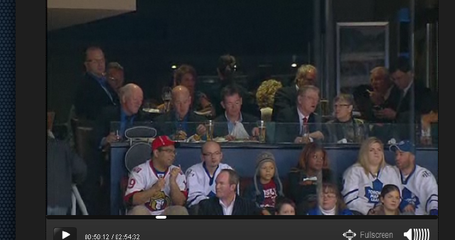