Friday's night's game between the Ottawa Senators and Buffalo Sabres had barely started, and then it was all but over. Derek Roy and Matt Ellis scored goals 16 seconds apart by the 2:25 mark of the first, and, despite plenty of shots, the Sens couldn't get a sniff against Sabres' tender Jhonas Enroth. It was 3-1 for Buffalo when the first frame ended.

After killing three straight penalties and outshooting the Sabres 11-5 in the second period, it looked like the Sens were carrying the momentum into the third period, and fans were salivating at the prospect of another late-game comeback. It wasn't to be, as some more rapid-fire offence (this time goals from Luke Adam and Ville Leino just 57 seconds apart) put the game will out of reach. Then the fat lady started singing, and it ended 5-1 in favour of the Sabres.

Sens Zero: Craig Anderson
Andy's goals-against average tonight was 49.65. Seriously. In less than two-and-a-half minutes, Anderson allowed two goals on six shots. Both were stoppable, if he had controlled rebounds even slightly. I would be surprised if his pulling wasn't an Ottawa Senators record for earliest goaltending change. It's been ugly pretty much all season for Anderson, but tonight was the ugliest.

Sens Killer: Net presence
None of the Sabres' goals were difficult goals (although Thomas Vanek's pass on the fourth was nice). They were all goals resultant from speed and net presence. That net presence was due to three factors: Buffalo wanted it more, Ottawa wasn't able (or willing) to clear traffic, and Ottawa's goaltenders weren't able to control rebounds.

Sens Killer: Derek Roy
D'uh... Roy is always a Sens killer. One goal and two assists on the night.

Honourable mentions: Sergei Gonchar, Jared Cowen
Gonchar appeared to take out a lot of anger on his shot when scoring Ottawa's first goal, and had a pretty solid night all around. He finished with four shots on net.

Cowen was one of only two Senators to finish even in plus-minus (Daniel Alfredsson was, obviously, the other), and he had a strong game defensively tonight. He was good on the penalty kill, and saved a goal after the puck had trickled by Alex Auld in the third period.

Tonight we missed: Matt Carkner
At issue tonight (as evidenced by the shot chart below) was clearing crowds in front of the Senators net. Matt Carkner is capable of doing that task admirably. No Senators defenceman was willing to do that reliably enough tonight, aside from perhaps Cowen. Carkner's moustache would have done a better job corralling rebounds than David Rundblad was able to. Brian Lee might also have been an effective addition. 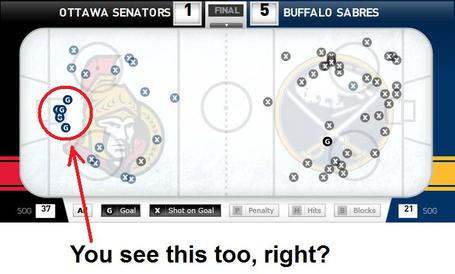