No suspension for Wolski; where is the Shanabanhammer?

Share All sharing options for: No suspension for Wolski; where is the Shanabanhammer?

On Saturday night, Wojtek Wolski caught Daniel Alfredsson with a dangerous elbow to the head. It struck many as a cut-and-dried violation of rule 48, and a predatory hit to boot. Given the precedent set by Brendan Shanahan through the pre-season, it was generally assumed Wolski would be given some level of supplemental discipline.

Now, Alfredsson is out of the lineup for at least a week with the first (officially diagnosed) concussion of his career. As Ian Mendes pointed out on Twitter, the illegal hit means there's a chance the captain could be out of the lineup on November 11, 2011 (11/11/11, a fitting date for number 11), a game set at the start of the season to be a fundraiser for the Royal Ottawa Hospital Foundation, a charity Alfredsson's become a significant member of. A suspension wouldn't have changed that fact, but the point of suspensions is to put forward obvious repercussions for rule violations in order to (hopefully) prevent future infractions.

At the dawn of the Brendan Shanahan era, it looked like we might get a stricter and clearer disciplinary system than was ever implemented under Colin Campbell. Over the course of ten days towards the end of September, the Shanabanhammer doled out nine suspensions totaling 60 games (29 pre-season, 31 regular season). In the month-long span since, he's only given out four suspensions, totaling six games plus an indefinite number for Andy Sutton.

The game hasn't magically cleaned up. Players are still making illegal hits. The difference now is that they're not being suspended for them

The Wheel of Justice has returned, it seems, and fans, media, and even players are now left scratching their heads wondering what's illegal and what isn't. Mike Fisher is one of those confused players. He was a victim of an illegal blindside hit to the head (very reminiscent of the one that ended Marc Savard's career), but Francois Beauchemin, the perpetrator of the hit, wasn't suspended, either. Fisher expressed his confusion on Twitter on Monday afternoon. 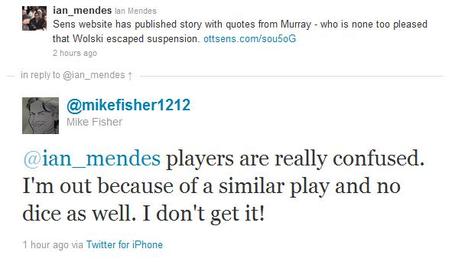 Suspensions are a tricky thing. General managers across the league are, in general, in favour of them... at least until it's one of their players who's being suspended. The NHLPA wants to protect its members' health, but it doesn't want them losing the money associated with the suspensions. The whole thing reeks of an unfortunate short-sightedness that completely misses the whole point of suspensions: Preventing future injuries.

Shanahan obviously had the freedom to impose extremely harsh suspensions during the pre-season, that much is obvious. It appears there has been some backlash, and some of Shanahan's power has been curbed. How, exactly, was he stripped of the power of the Shanabanhammer? Well, I imagine there was an epic confrontation between Brendan Shanahan and Gary Bettman that went a little something like this...

Bettman: You are a vain, greedy, cruel boy, Brendan.

Shanahan: And you are an old man, and a fool!

Bettman: Yes... I was a fool to think you were ready.

Bettman: [to Shanahan]: Brendan Shanahan, you have betrayed the express command of your Commissioner. Through your arrogance and stupidity, you have opened these peaceful realms and innocent lives to the horror and desolation of predictable and fittingly harsh suspensions! You are unworthy of these realms! You are unworthy of your title! YOU ARE UNWORTHY of the players you have betrayed! I now take from you your power! In the name of my previous commissioner, and his commissioner before! I, Gary Bettman, CAST YOU OUT!

Silly jokes aside, the all-time greatest player to don an Ottawa Senators jersey (at least of the modern variety) is now going to miss at least a few games during what may be his final season in the NHL due to an illegal, predatory check to the head with an elbow; a very serious infraction of at least three rules in the NHL's rulebook. Despite this fact, the deed has gone virtually unpunished (a two-minute minor penalty is of little consequence here). Some violations are penalized harshly, some go unpunished.

This, friends, is the National Hockey League: Plus ça change, plus c'est la même chose.