Share All sharing options for: Secondary scoring still a concern for Sens

For many years, the Senators were called a one-line team, as it seemed only the top-line could consistently put pucks in the net. Although it's early in the season, it's looking like that label may still be applicable. Here's a look at the Senators' goal scorers through eight games:

Obviously, Michalek and Spezza are in a league of their own for points amongst Senators' forwards with 43% of the goals scored. Add in Daniel Alfredsson (who is not normally a part of the top line, but is the third in points among forwards), and you have 57% of the Senators' goals. As a pie-chart, it's something like this: 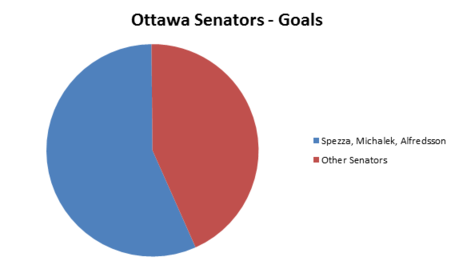 It's not as dire as some other teams (the Leafs' top three have 65% of their goals, for example), but it's certainly worrisome. What makes this even more worrisome? Michalek and Spezza simply can't continue to score like this.

Once these two cool down, who will be there to pick up the slack? It's something that has to be at the back of Paul MacLean's mind.